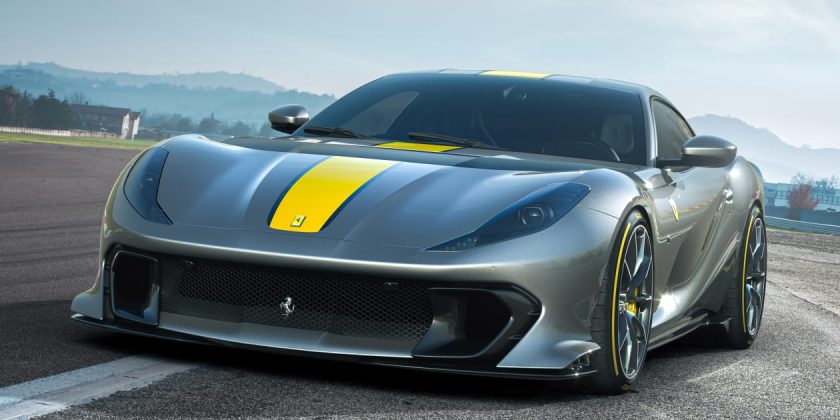 The new Ferrari 812 Competizione arrives as an even faster version of the V12-engined 812 Superfast, with more power, extra downforce and less weight

This is the new, limited edition Ferrari 812 Competizione. It’s a pumped up, more powerful, lightweight variant of the Italian brand’s front-engined V12 berlinetta, which has been unveiled alongside an open-top 812 Competizione A targa-style version of the car too.

Those fortunate enough to have secured one of the limited edition supercars will have to wait a while before it reaches their driveway, though. First deliveries for the hardtop are expected to arrive early next year, with the Competizione A following at the end of 2022.

The Ferrari 812 Competizione and 812 Competizione A are powered by a tuned version of the 812 Superfast’s 6.5-litre V12 engine. Thanks to a host of mechanical upgrades, the unit now generates 819bhp, which is 28bhp more than its standard sibling’s output.

To generate the extra power, Ferrari fitted the V12 with new con-rods, new pistons, a new intake manifold and a redesigned crankshaft. The ECU’s fuel map has also been revised, while the rev-limiter has been lifted to an incredible 9,500rpm.

As it was designed to run at higher rpm compared with the standard V12 (and to cut back on frictional losses) the engine also now runs on a slightly less viscous grade of oil. A byproduct of its revvier nature means that the pair of Competizione models’ torque output is slightly lower than the standard car, at 692Nm.

The engine sends drive to the rear wheels through a recalibrated version of the 812’s seven-speed dual-clutch automatic gearbox, which Ferrari says reduces shift times by five per cent. Thanks to the added power and a lower kerbweight, the Competizione will dispatch the 0-62mph sprint in a claimed 2.85 seconds, before reaching a top speed of “more than 211mph,” according to Ferrari.

To support the extra straight-line performance, the Italian brand has overhauled the 812 Superfast’s chassis, fitting it with independent four-wheel steering for the first time. Ferrari says the technology introduces a new-found level of agility and steering responsiveness, while greatly improving the amount of grip at the rear axle.

The performance upgrades are complemented by a suite of cosmetic tweaks. Up front, there’s a new bumper, with wider air intakes and a deeper splitter, which Ferrari says improves the cooling of the 812’s revised ‘aero’ calipers first seen on the brand’s SF90 Stradale, and the aerodynamics.

There’s also a large carbon fibre blade now integrated into the bonnet which, along with the louvres on the car’s wings, helps to expel hot air from the engine. Ferrari says the revisions provide a 10 per cent improvement in cooling over the 812 Superfast.

However, the most striking visual modifications are at the rear. The rear window has been replaced by an aluminum panel with vortex generators, which saves yet more weight over the standard glass. There’s also a larger lip spoiler and a new diffuser, with larger tunnels and a fresh twin-exit exhaust system. Despite the addition of particulate filters to the latter, which often muffle an exhaust’s note, Ferrari claims it has managed to retain the iconic V12 sound at medium-high frequencies.

The 812 Competizione A features the same front end design as the hard-top Competizione, but the rear deck has been redesigned to accommodate the different roof design. It features carbon fibre roll over hoops and a sleek cover, which houses the removable roof panel.

The Competizione A’s rear bodywork also boasts an aperture which doubles as an extra spoiler, smoothing out the air on its way to the ducktail spoiler, helping to make up for the drag caused by the open roof. To keep the car’s weight down, the roof panel is also made from carbon fibre.

Inside, the 812 Competizione is more familiar. The car’s dashboard, steering wheel and infotainment system are all carried over from the Superfast. However, the door cards have been redesigned using lighter materials, while the centre console gets the same H-gate themed gear selector found on Ferrari’s newest models, such as the Roma GT car.

Now read all the latest news on the upcoming Ferrari Purosangue SUV. Let us know your thoughts in the comments below…