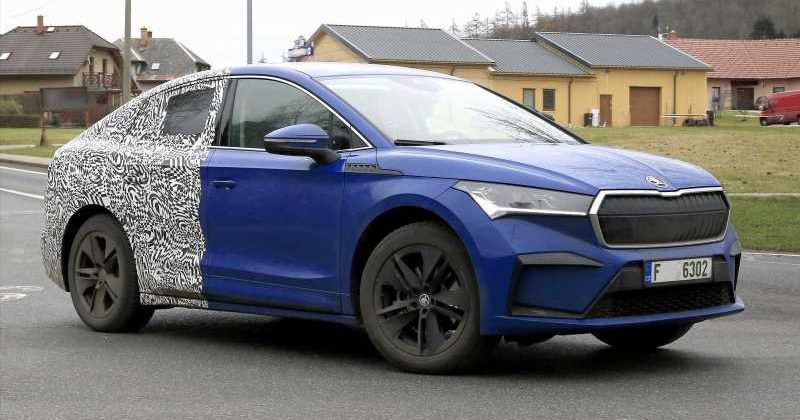 The Skoda Enyaq coupe will reach the UK market in two years time, where it’ll act as an alternative to the Tesla Model Y 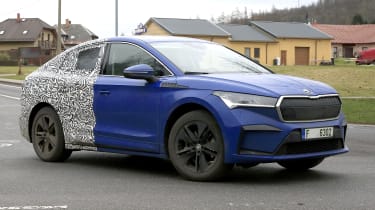 This is our best look yet at the upcoming Skoda Enyaq coupe, spied in minimal camouflage, as final development testing gets under way ahead of the car’s launch in 2022.

Skoda’s new EV will be revealed in full late next year, but when it arrives it willl occupy a unique position in the market as one of the first mainstream electric SUV coupes. Competition will quickly arrive in the shape of the Nissan Aryia, however.

The front end of this mule is identical to the standard Skoda Enyaq’s. It shares the same sharp headlamps, broad grille, front doors and tall ride-height. However, from the B-pillar rearwards everything is new, with a fresh sloping roofline, tweaked rear doors and a svelte tailgate, similar in design to those found on the 2019 Skoda Vision iV concept.

Despite the styling differences, the Enyaq coupe will be based on the same MEB platform as the standard SUV – which means buyers should be offered the same powertrain range. Entry-level models will get a single 177bhp electric motor, while the range-topping vRS variant should feature a 302bhp twin-motor setup.

Battery packs should also be shared between the two cars, with a 62kWh unit being fitted as standard and an 82kWh unit being offered as an optional extra. However, due to this new coupe’s more aerodynamic shape, we could see a minor improvement over the standard SUV’s maximum range of 316 miles. 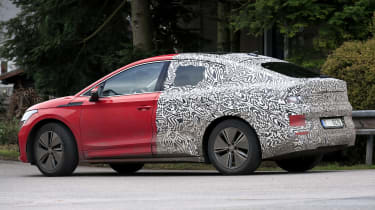 The new Enyaq coupe will come with 50kW DC fast charging as standard, although the 62kWh battery will offer optional support for 100kW charging. The 82kWh will be available with even faster 125kW charging – and Skoda has previously said that it will take between six and eight hours to charge the battery with a 7kW domestic wallbox.

Inside, buyers will get the same compact digital instrument cluster, 13-inch infotainment system, capacitive heater controls and dashboard design as the standard Enyaq SUV. However, due to the new sloping tailgate, the Enyaq coupe’s boot will fall dramatically in size over the standard Enyaq’s 585-litre capacity.

Like all coupe-SUVs, the Enyaq coupe will carry a premium over its conventionally shaped sibling. We’re expecting a hike of around £1,000 over the standard model, which should set the new car’s base-price at around £31,500 once the Government’s £3,000 plug-in vehicle grant has been applied.

Check out our thought on the new Skoda Enyaq prototype here…