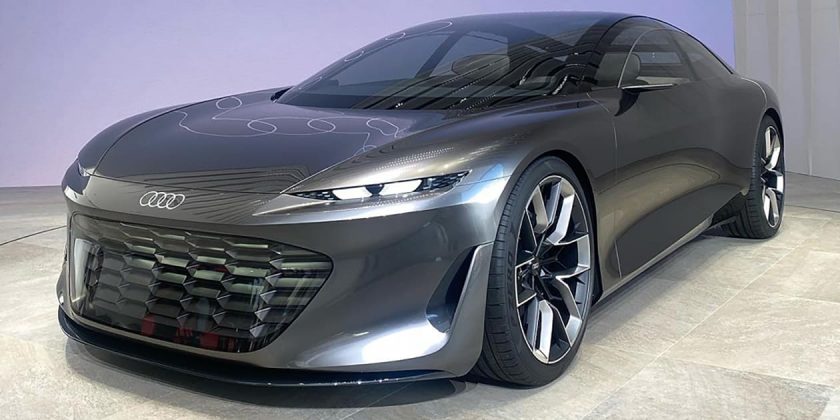 The Grandsphere is the second model in Audi’s trio of ‘sphere’ concepts, with the luxury four-door saloon previewing a future A8 limo with Level 4 autonomous tech

The new Audi Grandsphere concept has made its public debut at the 2021 Munich Motor Show. The all-electric luxury four-door saloon previews design and tech details that could make it onto the next-generation A8 limousine as part of Audi’s ‘Project Artemis’ venture to develop a high-tech, next-generation all-electric platform.

The Grandsphere is the second in Audi’s trio of ‘sphere’ concepts, following the Skysphere two-seater roadster that made its debut recently. Like its sibling, the Grandsphere is fully electric and has been designed as a study for the future of luxury automotive travel.

As such the concept features a new approach to interior design which, according to Audi, has been made possible thanks to Level 4 autonomous driving technology.

In fully autonomous mode the 5.35-metre-long saloon’s steering wheel and pedals retract into hidden compartments in the dashboard and floor, freeing up even more space with a design that “reimagines the interior, the passenger compartment, as the centre of the vehicle.”

This centres around a new infotainment system that projects a full-width image onto the wooden surface under the windscreen in Level 4 mode; when the driver takes manual control these displays are segmented for the driver and passenger.

It works with Audi’s newly developed MMI touchless response system. Physical control knobs for the climate and multimedia settings have been moved to the doors and, together with eye-tracking technology, the system recognises gestures, with users able to make a rotating motion with their hand to either increase or decrease the temperature, for example. The knobs can also be controlled physically and provide haptic feedback.

Audi claims that, combined with its new MMI technology, the Grandsphere’s autonomous driving mode “opens up new levels of freedom for all of the passengers.”

Speaking to Auto Express at the unveiling of the car, Nawka told us that “the Grandsphere represents a shift in approach. Large luxury saloons have traditionally had a focus on rear-seat passengers when it comes to comfort and technology, but with a new platform, a new architecture, it allows us to do things differently, which is what the Grandsphere shows.”

As a result, the Grandsphere is a 2+2, with the rear seats more compact than the front seats. The front seat backs recline to 40 degrees, boosting comfort but still allowing passengers to use the infotainment, with up to a 60-degree angle possible.

The front headrests can be tilted forward by 15 degrees and integrate temperature-controlled outlets for scented air, as well as speakers that are inaudible to other passengers. There’s also a drinks dispenser in the centre console between the front seats featuring two glasses.

Leather doesn’t feature in the interior; the cabin is constructed mainly from sustainable or recycled materials. There are also very few fittings, with this highly digital approach allowing the Grandsphere to integrate infotainment options when it comes to streaming music or video, as well as handling information on parking and even charging.

From the outside the Grandsphere boasts muscular, more coupe-like GT proportions compared with a traditional luxury saloon. The roofline is low, reinforced by split window glass that makes the car look lower and sleeker.

A long bonnet and a tapered tail with the 23-inch alloy wheels pushed towards the corners of the car have been made possible by the Grandsphere’s underpinnings.

At 5.35 metres long and with a 3.19-metre wheelbase, the Grandsphere’s vital dimensions mean it’s larger than Audi’s current A8 saloon.

The Grandsphere is based on the firm’s Premium Platform Electric (PPE) architecture for large EVs and is powered by a battery that takes up the whole of that wheelbase (also allowing for a ‘flatter’ layout), offering “around 120kWh” of energy.

The battery feeds a pair of electric motors offering 710bhp, 960Nm of torque and a claimed range of more than 466 miles. Audi has not yet released any performance claims.

PPE features 800v electronic architecture which means the Grandsphere is equipped with 270kW DC rapid charging, allowing the battery to be recharged from five to 80 per cent in less than 25 minutes; Audi claims just 10 minutes plugged into a rapid charger will add more than 186 miles of range.

The German brand also says that the Grandsphere is the model of the trio (including the Skysphere and Urbansphere SUV that will make its debut soon) that is closest to a production-ready car, and given that the firm has already outlined various elements will evolve into production form for a future luxury Audi model, this new approach gives us a good indication of the direction Audi will take.