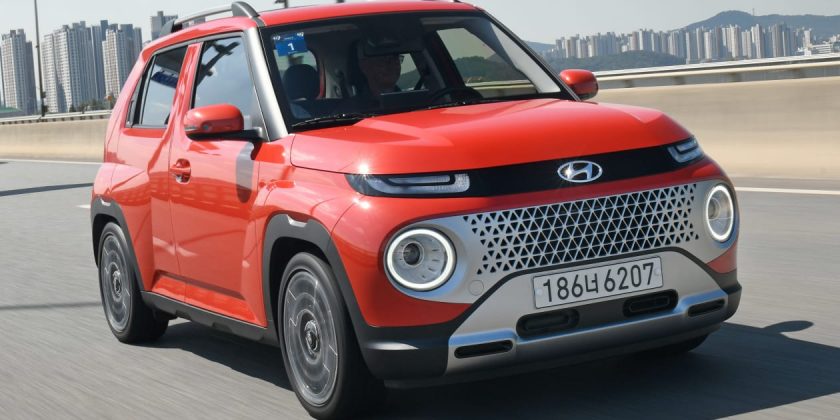 The quirky Hyundai Casper isn't coming to the UK in this form, but an all-electric version could be on the cards

Despite undercooked dynamics and a compromised powertrain, our first acquaintance with the Hyundai Casper leaves us hopeful at the prospect of an EV version. A silky electric motor would be an ideal stand-in for the harsh three-cylinder petrol, and given some extra polish, the Casper’s cheeky design and versatile cabin could cause a stir in the compact EV market.

The Casper may be the smallest car in Hyundai’s stable, but it packs quite a visual punch. The SUV-style city car is a big seller on its home turf in South Korea, but European buyers are yet to get their hands on the Volkswagen up! rival. There are currently no official plans to sell the Casper on our shores, but reports suggest that a potential EV version could enter the UK market in 2023.

To get a taste of what could be a funky, sub-£20,000 electric hatch if the rumours materialise, Auto Express hopped aboard a combustion-engined Casper for a short drive on Korean roads.

The Casper’s squat, punchy stance is reminiscent of the Suzuki Ignis, but Hyundai has packed a unique character into its diminutive proportions. With its boxy arches, oversized fog lights and jacked up ride height, the design seems tailor-made for Europe, where we'd wager it'd fly out of showrooms on looks alone.

We drove the most powerful Casper available – the turbocharged petrol version, which is distinguished by a pair of extra intake holes in the front bumper. They're said to be inspired by the 993-generation Porsche 911 Turbo S, but parallels with the 184mph supercar end there – the Casper uses a 1.0-litre three-cylinder motor that offers 98bhp.

All Caspers drive the front wheels through a four-speed automatic gearbox, operated by a gear lever sprouting from the dashboard. The cabin isn’t exactly plush, but it feels robust and suits the car’s affordable brief. The crisp fully-digital dashboard is a welcome surprise, as are heated seats and a ventilated driver’s seat. The main infotainment screen is perched awkwardly atop of the dashboard, but the system copes well enough with basic tasks.

While the Casper’s funky exterior design hasn’t seeped into the cabin, flashes of orange and fabric trims do add some visual appeal, and there’s genuine versatility on offer here. The front seat bases connect to form a single bench, and the sliding rear seats can be adjusted to provide either more legroom (just enough for one adult behind another) or boot space. With camping in mind, all four seats can be folded flat to provide a large sleeping area.

These cost-effective innovations bring real value to the package, but the Casper’s biggest test is out on the road. Unfortunately, the first hundred metres or so unearth a few holes in its dynamic repertoire. Thankfully, these primarily relate to the powertrain, and would be easily rectified by an all-electric model.

With just four ratios to work with, the Casper tends to hang onto gears and shifts can occasionally send a shunt through the driveline. Performance isn’t brisk by any account, but there’s easily enough shove for city driving and motorway cruising – despite the engine’s coarse note at high revs encouraging a gentle right foot.

The Casper’s light steering and jacked up ride height make it easy to spot gaps and thread the car through traffic, and it feels right at home in town. The suspension lacks sophistication over some deep potholes and sharp road imperfections, however, with the occasional thud as it runs into its bump stops.

It’s important to note that a Casper EV would require a bespoke suspension tune by virtue of a lower centre of gravity, heavier kerb weight and altered weight distribution, so conclusions we can draw about a potential electric version are limited. More polish would be welcome nonetheless, and the model we drove didn’t feel particularly direct at speed, bobbing around slightly over undulations.

As it stands, the Casper feels ripe for a fully-electric powertrain to do justice to what is a quirky, desirable urban runaround. If Hyundai does indeed launch a battery-powered version in the UK with a touch more engineering finesse, its adorable looks and clever interior could see it land very well indeed.