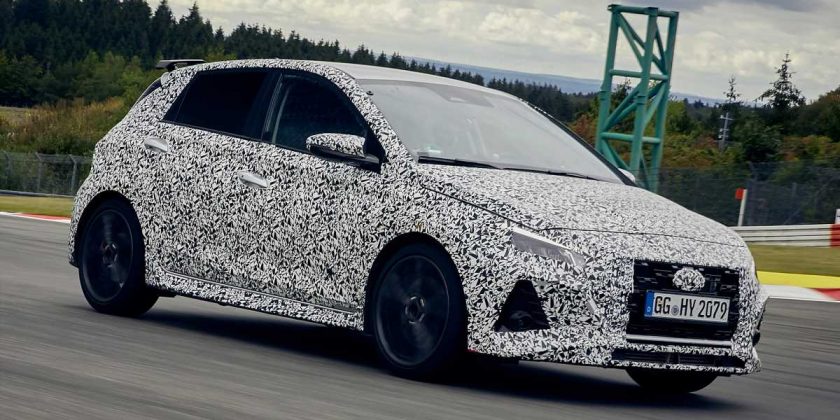 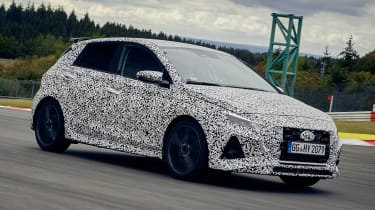 The future of the small hot hatch was in doubt, but Hyundai has proven there’s life in it yet. Our time behind the wheel of the i20 N may have been brief but it was long enough to confirm that this is shaping up to be a highly entertaining and accomplished hot hatch. When it lands in showrooms, Hyundai’s trademark competitive pricing means it could give the Ford Fiesta ST a real headache.

There used to be an abundance of choice in the supermini sized hot hatchbacks sector, but it’s a changing, and sadly diminishing landscape. While the arrival of a hot Ford Fiesta ST would normally be rivalled by a Renaultsport fettled Clio, a GTi badged Peugeot 208 and a Cupra version of the SEAT Ibiza, now only the Ford remains on sale.

Carmakers are looking to slash costs as well as average fleet CO2 emissions, and the business case for small, affordable performance cars is becoming increasingly difficult to justify. However, as numerous brands begin to bring the axe down on their hot hatches, Hyundai is wading in with an all-new proposition: the i20 N.

How can Hyundai do this? Unlike a lot of its competitors, the Korean firm is one step ahead when it comes to electrified vehicles. It’s already got a fleet of them on sale today – rivals have not – and they go a significant way to offset the higher CO2 output of performance cars.

More reviews for i20

Another key factor is that Hyundai’s N division is trying to establish itself as a key player in the performance car market. The i30 N got things off to a stellar start, but the potential for an influx of customers left deserted by the industry’s weaning enthusiasm for small hot hatchbacks is an opportunity too good to hesitate on. 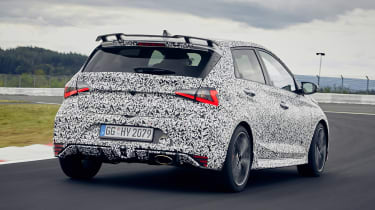 You can’t talk about hot superminis without mentioning the Fiesta ST. Pound-for-pound, it’s one of the best performance cars on sale today, so in order for the i20 N to succeed it can’t just be good – it has to be great.

Let’s start with the i20 N’s numbers: 202bhp and 275Nm of torque are developed from a 1.6-litre T-GDi four-cylinder turbo petrol engine. Hyundai says it’s good for 0-62mph in 6.7 seconds – a couple of tenths down on an ST. The transmission is a six-speed manual only, which sends power to the front wheels via a mechanical limited slip differential, likely to be standard in the UK.

The prototypes we drove were very early models. Engineers have a little bit of fine turning to do, but the way this thing drives will be very representative of the car that will be in showrooms early next year. So has Hyundai succeeded in developing a credible Fiesta ST rival? In a word, absolutely.

It starts with the driving position. It’s low, the seats are supportive but comfortable, and there’s plenty of adjustability steering wheel and seat itself. We can’t really make a judgement on interior quality – only the bare essentials had been fitted to the prototypes to make them drivable. But a set of bright digital dials and prominent central touchscreen should cater for all your digital/smartphone needs.

The 1.6-litre engine doesn’t fizz like the three-cylinder turbo in the Fiesta ST, nor does it sound as good, but it delivers smooth and strong performance once above 2,500rpm. It doesn’t have that overly turbocharged feel to it like the Fiesta, which makes it feel like a more mature hot hatch at low to medium speeds.

The suspension setup has been redesigned and reinforced over a regular i20, and features new knuckles, springs and shock absorbers. The dampers are passive, so even as you cycle through the car’s driving modes, the suspension remains the same. But, it feels like a well judged setup on the road; over more rutted surfaces on our German test route it always felt compliant, flowing with the road and giving you enough information through the base of the seat to what’s going on beneath you without crashing over more rutted surfaces. 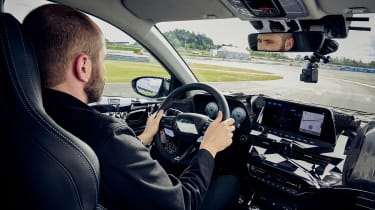 Another positive is the steering, which has a solid, consistent weighting and a really smooth feel lock-to-lock. Plant your foot and there’s no torque steer, unlike an ST. There’s plenty of bite from the front end, but the differential isn’t as aggressive as that in the Fiesta, so it lacks that slingshot-like action as you point it into a corner and stand on the power.

The six-speed manual has a short, snappy throw but the action does feel a little light – a little more heft would be welcome. Launch control and rev matching functions also come as standard, the latter integrated seamlessly, but it can be switched off if owners prefer to heel-and-toe themselves.

A handful of laps around the Nurburgring GP circuit also highlighted the i20 N’s more playful side. Switching off the ESC and traction control removes all electronic safety nets – “off means off” Hyundia’s engineers proudly proclaim.

Do so and the chassis feels really nicely balanced; you can coax the rear into small, playful slides by lifting off the throttle mid corner, and even on track the body control feels solid despite the lack of adaptive dampers.

The i20 N is unquestionably an excellent little hot hatch, but what could really accelerate its success is its price. Hyundai has a habit of undercutting rivals by some margin without asking you to make compromises on the overall package. How does £20,000 sound? Because that’s what insiders have suggested it could be sold for, which would make it a bargain even alongside the heavily fanfared Fiesta.