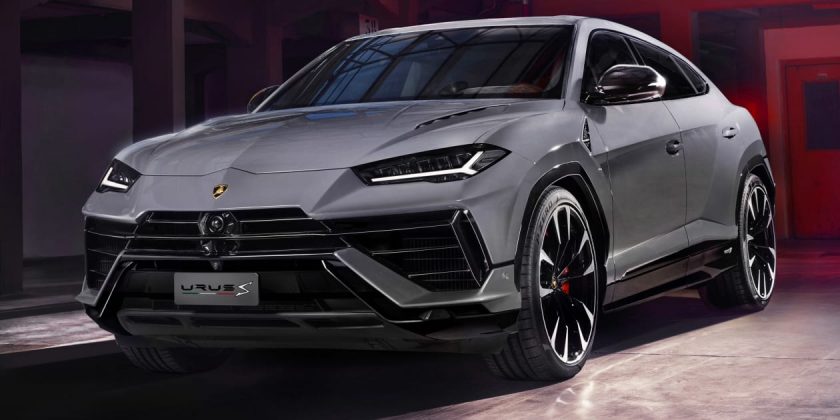 The Urus remains Lamborghini’s only SUV, having first gone into production in 2018. Unlike its supercar siblings, we’ve not really seen many variants of it. But now there’s the more focused Performante and this – the new Urus S – to choose from.

The Lamborghini Urus S gains a few design changes over the pre-facelift Urus, it will also be positioned as the entry-level model under the hotter Performante. Pricing for the Urus is expected to rise significantly, from £159,925 to around £188,000.

Visual tweaks for the Urus S appear to have been modelled after the Performante. We can see the Performante’s new front end design with a more angular bumper, however the larger splitter isn’t seen on the Urus S.

There’s also a new bonnet, but unlike the Performante it isn’t carbon fibre, although it does get the same matte black air vents. You can also specify it to be painted to look like carbon fibre. Lamborghini says there’s an “optional visible carbon fibre roof”.

Towards the rear, we can see further influence from the Performante with a new rear bumper style and air ducts, although the Performante’s rear spoiler hasn’t been carried over. A new quad-exit exhaust system can be had in brushed steel, matte black or shiny black. Wheel sizes vary with 21, 22 and 23-inch rims available.

The Urus S utilises the same powertrain as the Performante, so under the bonnet you’ll find a twin-turbocharged 4.0-litre V8 producing 657bhp and 850Nm of torque. The additional 16bhp means the acceleration from 0-62mph has improved, albeit from 3.6 seconds to 3.5 seconds. The 190mph top speed remains. Power goes to all four wheels through a ZF eight-speed automatic transmission.

Inside of the Urus hasn’t changed much, with the same 10.1-inch infotainment display unit and an 8.6-inch configurable touchscreen display being offered. There are new interior colours to be specified with the Bicolor Sportivo and Bi-color Sophisticated options, however.