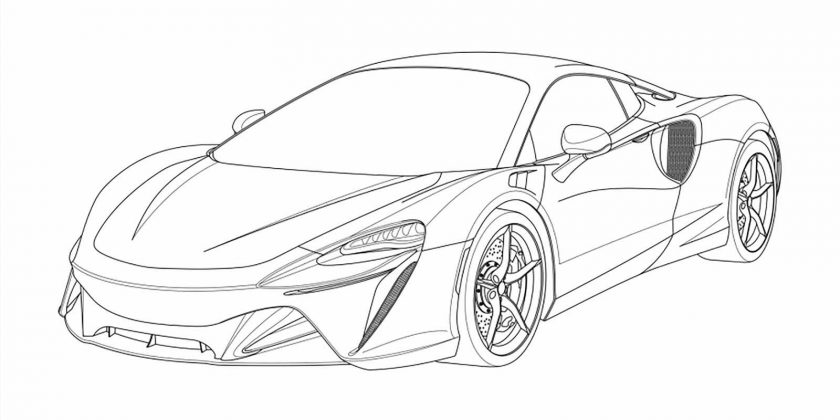 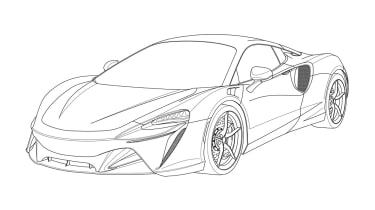 McLaren has confirmed that it will introduce a new hybrid supercar in 2021, designed to sit between the current GT and 720S. When it arrives it’ll provide fresh competition for the likes of the Ferrari F8 Tributo and Lamborghini Huracan Performante and new patent drawings give us our first glimpse at how it will look.

These new patent drawings reveal the British firm will take an evolutionary approach to the car’s design, moving the look of its entry-level model into step with the rest of its product range.

The supercar’s headlamp units look similar to those found on the Speedtail; the aggressive front grille shares design elements with the Senna and the enormous meshed rear valance and exhaust outlets are almost identical to the 720S’s.

McLaren recently teased its new Sport Series supercar with a collection of official “spy shots,” while confirming it will also be based on an all-new carbon fibre monocoque. The British firm also announced it will be powered by a new electrified powertrain.

Since the P1 was launched in 2013, every McLaren model has been powered by a V8. The units were all developed in tandem with the engine specialists, Ricardo, and sized at either 3.8 or 4.0-litres. However, this new “High-Performance-Hybrid” supercar will use a turbocharged V6 engine, mated to a battery pack and an electric motor – and, unlike the McLaren’s previous forays into hybrid drive, it’ll be capable of pure-electric running. 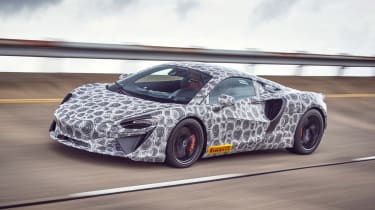 The next-generation supercar’s bodywork will be propped up by an all-new carbon-fibre monocoque dubbed McLaren Lightweight Carbon Architecture. It replaces the firm’s old Monocell platform, which has been a base for McLaren’s production cars since the original MP4-12C. With the arrival of this platform, McLaren will retire its Sports Series line-up, too.

The new chassis has been designed to accommodate the batteries and electrical architecture required for hybrid drive – and it also incorporates fresh weight-saving tactics to offset the added bulk that comes with these components. McLaren has confirmed that the platform will be manufactured at its £50 million composites base in Sheffield.

The push towards hybrid drive forms part of McLaren’s £1.2 billion Track 25 business plan, which will see 18 new petrol-hybrid powered McLarens launched by 2025. The company says it is currently evaluating a new high-power battery pack for a full EV setup that will offer a claimed 30 minutes of electric range around a race track.