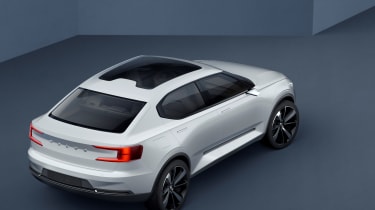 The Polestar 3 will be the brand’s first SUV, with the large but sleek electric model designed to take on the Tesla Model S and Jaguar I-Pace when it arrives in 2022.

Speaking to Auto Express, Polestar design director Max Missoni revealed that the new model is “in the making,” and that we can expect it to set a new design direction, leveraging the looks of the Precept concept when it arrives early this decade.

“The next car that Polestar will launch is the Polestar 3. It will be a high performance SUV, that is a different car in its bodystyle, but I would say the Precept serves as a precursor to the design language that you will see in that car,” he explained.

The Precept is Polestar’s latest reveal and was destined to be the brand’s Geneva show-stopper before this year’s edition of the expo was cancelled. It has been used as a statement of intent, but this is the first confirmation that the next car to emerge wearing a Polestar badge will take direct inspiration from it.

“We are not over-promising. This is quite a realistic statement of our future,” claimed Missoni.

Technical information on the car remains thin on the ground but we know it will be a pure electric model available in right-hand drive (unlike the Polestar 1), while a targeted range of 310 miles has been mentioned before. 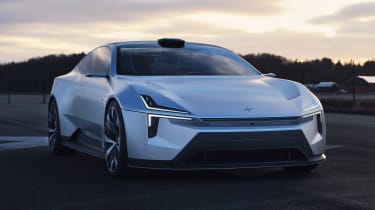 Polestar’s strategy of using performance parts from specialist manufacturers in the Polestar 1 is also likely to be carried over to the Polestar 3. The ‘1’ has Ohlins suspension and an Akebono braking system to underline its performance focus. Like the Polestar 1, the ‘3’ will be produced at the brand’s new facility in Chengdu, China.

Goodman, speaking to us back at the 2018 Goodwood Festival of Speed, said that Polestar’s unique position in the market will give it the agility to respond quickly and think in an innovative way, while enabling it to still leverage Volvo’s technological and engineering expertise.

“We’ve got very different positioning. You’ve got your traditional OEM like Porsche and where they’re going with their EVs then on the start-up side you’ve got Tesla and we’d put ourselves in the middle between the two.

“We’ve got Volvo platforms and Volvo manufacturing standards. We’ll be using trusted technology with the ability to build cars and build factories. It also gives us a global reach. We also have the agility of a start-up, we think of ourselves internally as a 90-year-old start up. We have the technology but also the chance to move faster and try different things.”

The Polestar 3 will be the first Polestar to use Volvo’s new SPA2 platform – an evolution of the SPA1 architecture used under larger models such as the brand’s S60/90 saloons, V60/90 estates and XC60/90 SUVs. As such, expect the production Polestar 3 to be almost as large as the XC90 in size.

Are you excited by Polestar's re-invention as a standalone brand? Can it tame Tesla? Let us know below…