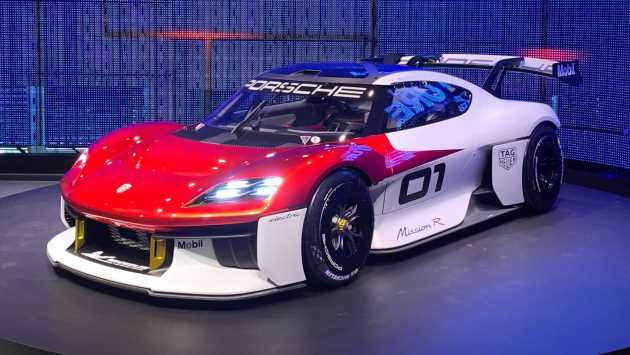 Designed to support customer racing, the Mission R points towards a pure-electric Porsche Cayman for 2024

Porsche has revealed the Mission R concept at the 2021 Munich Motor Show – a pure-electric race car designed to compete in a single-make race series, much like the brand’s existing 911 GT3 Cup and GT3 R models.

While only a concept for now, the Mission R hints at the possibility of a future electric sports car, similar in size to the current Porsche Cayman and Boxster models. The team behind the Mission R project confirmed they are “working on production cars at the same time” – with the same team responsible for both projects.

The team confirmed that the front motor is mainly responsible for the regenerative braking set-up, however, allowing the system to feed power back to the battery – boosting range and potential track time. The positioning of the hardware will, Porsche claims, offer a traditional mid-engine – or “mid-battery” driving experience.

Oliver Blume, Chairman of the Executive Board of Porsche AG said: "The [Mission R] is our vision of all-electric customer motorsports. The Mission R embodies everything that makes Porsche strong: performance, design and sustainability."

Porsche doesn’t offer a WLTP-rated range, but claims the Mission R is capable of “30 to 45 minutes” of track driving on a full battery – depending on track layout and performance usage. Utilising a brand-new 900-volt electrical architecture (100v greater than the production Porsche Taycan), will allow the Mission R a five-to-80 per cent charge in just 15 minutes, at speeds of up to 340kW.

From the front, the Mission R shares much of its design cues with the Taycan, with identical four-point LED daytime running lights, incorporated within the main headlamp unit. The lower bumper houses the Porsche Active Aerodynamics (PAA), which in conjunction with the huge rear wing, should help generate significant downforce at circuit speeds.

To the side the concept has more in common with the Cayman or 911, with a two-door layout and sloping roofline. The newly developed, single-piece roll cage is made from carbon fibre and integrated into the design of the car and cabin; this set-up doesn’t yet meet FIA approval, but Porsche is hoping it can influence changes in regulation in time for the car’s eventual production.

At the rear there is a single-piece rear light bar with integrated Porsche lettering. This forms part of the car’s structure and is likely to be repeated in production models in the future. That sizeable active wing finishes off the back-end styling.

Inside sits a single bucket seat with 3D-printed and 3D-knitted seat foam. The spartan dashboard comprises a pair of displays; a conventional instrument cluster, plus a separate screen on the steering wheel, flanked by myriad buttons and switches. There are two cameras – one fixed and one moveable, allowing drivers to broadcast their stints in the car during testing and racing.

While most cars of this ilk are conceived off the back of an existing model, the Mission R has apparently been designed alongside the production car from the outset. This “close collaboration” will influence future production models, including possible electric Cayman and Boxster variants.

“We can definitely take a lot of design cues and production methods and implement them in future production cars,” said Ingo Bauer-Scheinhütte, Porsche’s Manager for Advanced Design Exterior Style. “We are working on production cars at the same time; it is the same teams.”

While Bauer-Scheinhütte refused to nail his colours to the mast, he went on to confirm that the Mission R is “very similar to Cayman/Boxster size” – hinting towards the possibility of a two-seat electric sports car when the current cars reach the end of their lives around 2024.

What do you make of Porsche’s Munich Motor Show concept? Let us know in the comments below…