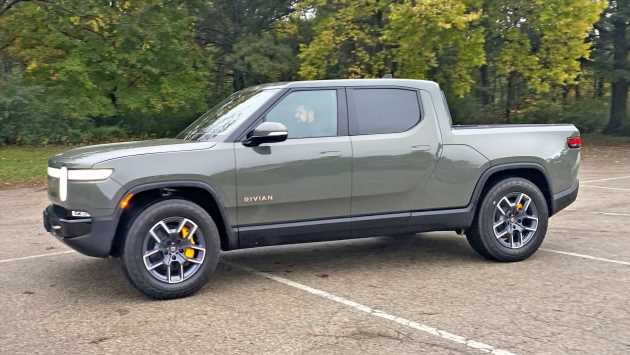 Our first taste of the Rivian R1T leaves us feeling this could be a brand about to break out the Tesla-style hype all over again. And there’s word of a UK factory – a strong sign this brand could land in the UK.

In the town of Normal, Illinois, USA, two hours south of Chicago, something very different is hitting the roads.

It’s the Rivian R1T – an all-electric pick-up truck from the much-hyped start-up firm that’s set to rival Tesla. It’s built in Normal at a former Mitsubishi factory, where an SUV version called the R1S will soon join it. And we’ve had the chance of an exclusive first ride.

This is the R1T Large Pack, which uses the largest battery the brand makes – an impressive 135kWh, which gives a claimed range of 314 miles to US standards and is capable of 200kW charging. That means, at a charger fast enough, you’ll be able to put an additional 139 miles into the R1T’s battery in 20 minutes. A 105kWh battery will be standard, while a Max Pack will enable up to 397 miles of range, despite the three-tonne-plus weight of the vehicle.

Once you’ve climbed aboard, you have to remind yourself that you’re sitting in a commercial vehicle. It’s all very premium, and very unlike the average pick-up truck.

You sink into the comfortable vegan leather seats, and gaze out over a relatively short bonnet. There’s the impressive cockpit to take in next, with its hi-tech dual screens, a digital instrument panel for the driver and a huge central infotainment screen. There’s also the large panoramic glass roof – and this is all before you get moving.

While most four-wheel-drive EVs have an electric motor on each axle, the Rivian stands out because it has a motor for each wheel. It makes a big difference in how it feels on the road. The torque vectoring and optimal distribution of power enabled by this system mean that despite its hefty weight, the R1T glides along almost like a passenger car.

This is how it feels in the “all-purpose” driving mode, but for those who want to explore the power of the colossal 743bhp set-up, Sport mode unlocks the performance potential; this is a pick-up truck with more power than a Ferrari F8.

It feels as rapid as that figure suggests, weight included. However, we’ll have to wait to see how it manages off-road, where its adjustable air suspension comes to the fore.