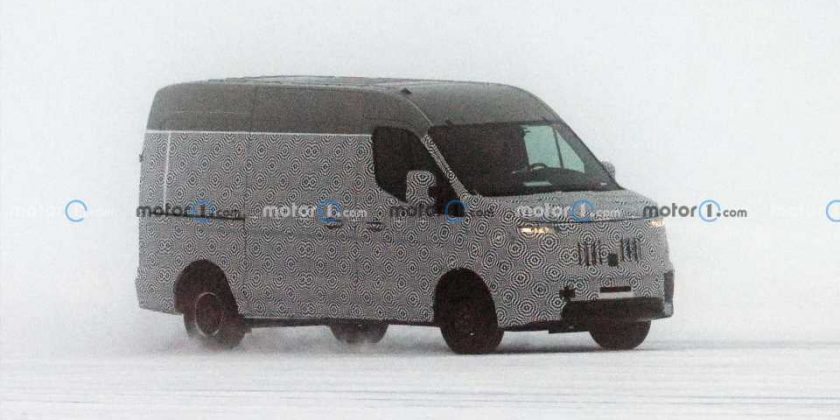 The current generation Renault Master has been on sale in Europe since 2010, which makes it one of the oldest light commercial vehicles on the market. The French automaker is already working on a brand new Master van and our spies were able to catch an early prototype testing in winter conditions.

Judging by the amount of camouflage covering about three-fourths of the new Master’s body, Renault is probably still in the early stages of development. While we can’t confirm the information for now, it seems that the bus is wearing its production body as there are no visible fake panels attached to the metal. The headlights and taillights also appear to be production units, though with so much camouflage covering them, it’s really difficult to tell what is their actual shape.

We expect this new Master to bring big improvements underneath the skin. Renault already has a battery-powered Master but it has a small 55-kilowatt-hour battery pack, which is good for about 120 miles (190 kilometers) measured by the WLTP cycle. This is surely not an impressive figure, but bear in mind the van is intended for so-called “last-mile” deliveries. Its successor could boast a significantly larger battery pack boosting that range and making the model more suitable for inter-city deliveries.

Of course, the electric variant isn’t expected to be the most popular powertrain for the new Master. In Europe, diesel-powered vans are still dominating the LCV sales and the new model from France is expected to offer at least one diesel option. The current model is sold with a 2.3-liter dCi compression ignition mill with an output of up to 180 horsepower. We don’t expect Renault to bring a completely new engine, though.

An interesting rumor surrounding the new Master claims there is going to be a hydrogen-powered version, too. Last year, Renault presented the Master H2-TECH as a pilot fuel cell LCV project and word on the street is the new generation of the bus will bring a significant tech boost in that department.