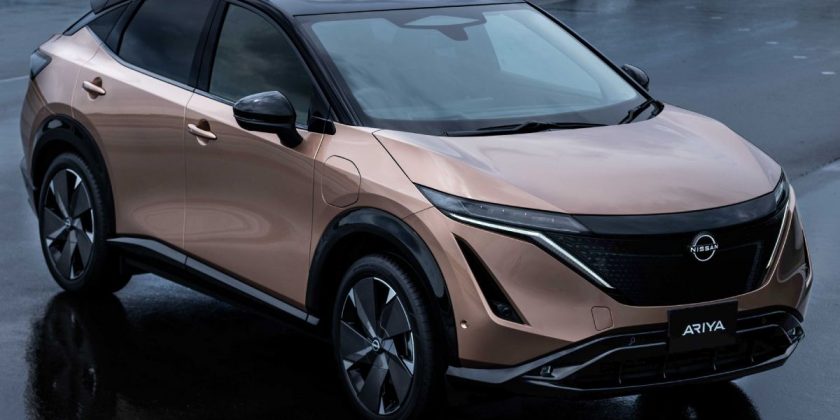 Nissan is opening the next chapter of its electrification strategy with the Ariya, its first all-electric SUV. A faithful recreation of the concept shown at the Tokyo Motor Show last year, it represents a massive leap forward for the brand in terms of design, technology and performance.

Built on an all-new, dedicated electric vehicle platform, the Ariya is the first car to feature Nissan’s new electrified brand identity. The show car’s sleek profile has been largely retained, with a low, sweeping roofline, a short bonnet and a flush front end.

The traditional grille has been replaced by what Nissan calls a shield, with the new logo sitting front and centre. This panel, which features a kumiko pattern just underneath the surface, hides the sensors for the car’s ProPilot autonomous driving features, which we’ll talk about later. Framing the shield is a pair of light strips, which combine with the LED headlights to mimic the company’s signature V-motion look.

The side profile is defined by the clean surfacing, a single shoulder line connecting the front and rear fascias as well as the arching window trim. Moving to the rear, you’ll find subtly flared fenders, a blacked-out full-width tail light that stays permanently on when driving, and a sporty tailgate spoiler. On the colour palette are five full-body paint options and nine two-tone colour schemes, the latter with a black roof. The Ariya is also offered with the Akatsuki package (unrelated to the Naruto series, just so you know), featuring a copper hue inspired by sunlight at daybreak. Five-spoke 19-inch alloy wheels come as standard, with 20-inch rollers available depending on the grade selected.

Inside, it’s just as futuristic as on the outside, with a clean and uncluttered cabin that Nissan says is the most spacious in its class. The open, flat floor is claimed to provide plenty of legroom and facilitate more natural interaction between passengers, while Nissan’s ultra-comfortable Zero Gravity seats feature a slimmer design to free up yet more room.

The minimalist dashboard, which wraps around the occupants, dispenses with conventional buttons and switches – the designers instead opted to go with capacitive controls that blend into the wood trim when not in use. The centre armrest console can be moved to suit the driver and is topped with a pebble-like “gear selector” that supposedly provides a more relaxed driving atmosphere. Housed in the wavy freestanding display panel are two 12.3-inch displays for the instrumentation and the infotainment system. There’s a new user interface and a “hybrid” voice control system with advanced natural language recognition, which can be operated by saying either “Hello Nissan” or “Hey Nissan”. Alternatively, you can use Amazon Alexa to control music, make calls and control smart home appliances.

Just like last year’s facelifted Skyline, the Ariya is available with ProPilot 2.0, which provides hands-off single-lane highway automated driving and even assists in lane changes. The system uses seven cameras, five millimetre-wave radar sensors and 12 ultrasonic sonar sensors to get a sense of the car’s surroundings, together with the navigation system and high-definition, three-dimensional map data. In Japan, the Ariya will also be offered with ProPilot Park, allowing users to park their car remotely using an Intelligent Key.

The Ariya will be sold with a choice of two lithium-ion battery capacities, 63 kWh and 87 kWh, both of which will be offered with either rear- or all-wheel drive. With the smallest battery, the single-motor variant makes 160 kW (215 hp) and 300 Nm of torque and delivers an estimated range of up to 450 km on the WLTP cycle, along with a zero-to-100 km/h sprint time of 7.5 seconds. Nissan says that with a 130 kW CHAdeMO fast charger in Japan, the Ariya can draw up to 375 km of additional range in just 30 minutes. The battery, which sits under the floor for a lower centre of gravity, features a slimline design to free up space for the aforementioned flat floor, while an integrated cross member increases structural rigidity. The suspension has been tuned to suit, with the company claiming stable handling, a comfortable ride and reduced vibrations and noise.

Both all-wheel-drive models benefit from the new e-4ORCE all-wheel control technology, utilising learnings from the GT-R’s ATTESA E-TS torque split system and the Patrol’s intelligent 4×4 tech. It precisely controls the torque delivery on each axle to ensure maximum traction on any surface; it also introduces rear-motor regenerative braking to reduce vehicle pitch and dive under deceleration.

The system also applies independent braking force on each wheel to deliver a sort of torque vectoring effect, offering maximum cornering grip. The Leaf’s e-Pedal feature, which allows drivers to accelerate and decelerate using only the throttle pedal, can also be found here.

Deliveries of the new Ariya will kick off in Japan in mid-2021, with pricing projected to start at around 5 million yen (RM200,000). Like what you see here?