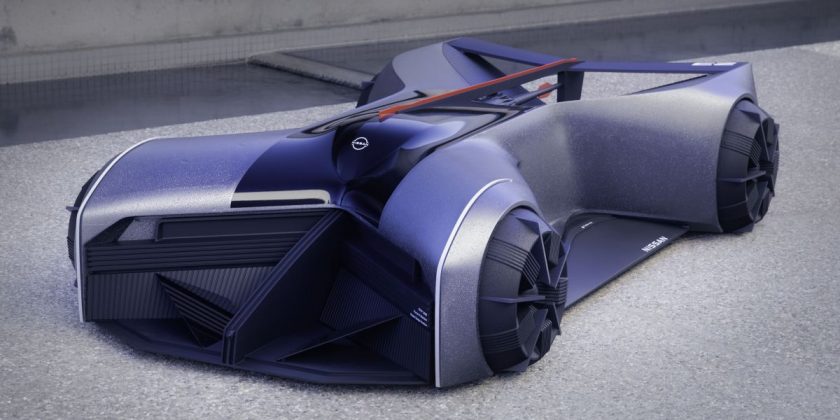 Concept cars serve as a blank canvas of sorts for a designer’s ideas, and here is an example that departs from convention a little further than usual – the Nissan GT-R (X) 2050.

As its name indicates, the GT-R (X) 2050 is imagined to be what’s possible for the year 2050, designed by ArtCenter College of Design senior Jaebum “JB” Choi, who was also starting an internship at Nissan Design America (NDA) in La Jolla, California.

The GT-R (X) 2050 design concept drew inspiration from the Nissan GT-R for a design study ” in a future autonomous era when machines can embody a driver’s emotion through a physical connection,” said Nissan. This is a 1:1 scale design, and as shown here, it is very modestly sized – where does the occupant go?

The concept measures just 2,908 mm long, 1,537 mm wide and 658 mm tall with a wheelbase of 1,756 mm, which means the single occupant will board the vehicle horizontally in a prone position, with all limbs extended in an ‘X’ shape. Here, the occupant is depicted to be wearing a form-fitting suit and helmet, akin to a motorcyclist’s protective outfit.

Rolling stock is a set of 15-inch wheels mounted with tyres that have an outer diameter of 21 inches, and the wheels’ spoke pattern were designed to cool the wheel quickly even under extreme braking, said Nissan. No technical specification was mentioned for the design study, though it is imagined to be a high-performance electric powertrain.

Choi envisions the concept to be a ‘wearable machine’ that links the autonomous concept vehicle to its occupant via a brain-to-vehicle connection, which is imagined to offer better performance than typical self-driving vehicles, says Nissan – mind-controlled driving, in a sense. The vehicle imitates the shape of the human body in the aforementioned X-shaped position to efficiently protect the brain, says Choi.

“Exoskeletons today make people stronger by wearing mechanical structures. I tried to fit the size of a person’s body as much as I could, as if I were wearing a car. I wanted to create a new form of machine that is not a vehicle to ride, it is the space where machine and the human become one,” he said.

Here, the occupant’s helmet is designed to be inserted into a slot for forward vision camera with VR vision, while a brain-to-core transmitter would help the brain activate digitised signals.

Choi commenced his internship around the time restrictions to contain the Covid-19 pandemic were being put in place, which influenced his and others’ approach towards thinking about the future, according to Nissan.

“I started my internship at NDA in January and participated in company projects for about two months. Then, I started my ‘vision humanoid’ project for the rest of the internship, working from home because of Covid-19. Little did I imagine then that the team at NDA would take me under their wings and help me create it as a full-size model,” said Choi.

“JB has essentially envisioned a new mode of transportation that people could experience like clothes, “wearable,” instead of a traditional vehicle “carriage.” It is the kind of breaking-the-mold thinking that has always been encouraged here at NDA. We’ve been honoured to help bring JB’s vision to life,” said NDA vice president David Woodhouse.