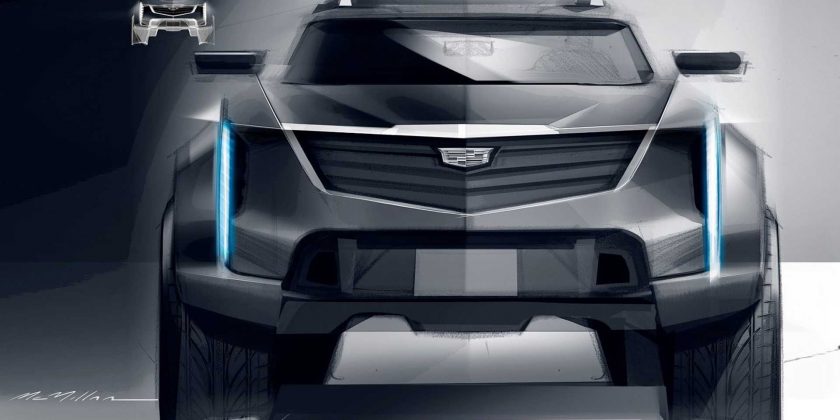 It could also be a complete flight-of-fancy.

Before we begin, full disclosure is in order. The wacky Cadillac sketch you see above comes from the official GM Design Instagram account, but it comes without any context. The only info with the post was a brief lean & mean quip, though judging by the wide face and massive tires we don’t get the lean portion. It certainly looks mean, though not nearly as menacing as the GMC Denali HD dually posted to the account a couple of days ago.

We offer this disclosure because everything that follows is pure speculation on our part. That includes the headline, which states this could be a preview for Caddy’s upcoming electric SUV. Our musings aren’t without supporting evidence, however – Cadillac already confirmed that it’s planning an Escalade-sized EV people mover. It’s part of the automaker’s future product roadmap, and there’s no denying this design looks considerably larger than the Lyriq EV crossover revealed in August.

That’s all well and good, but simply being big doesn’t mean we’re looking at a future product. To make that connection we present the GMC Hummer, which Cadillac confirmed will be the platform on which its big new electric SUV is based. The Hummer’s reveal is scheduled for October 20, but a head-on teaser photo (below) bears at least some resemblance to the beefy Cadillac design (above). Admittedly it’s a thin connection, but it’s enough to be interesting for those of us outside GM’s inner circle.

That said, do we think this is a carbon copy of a future Cadillac model? In short, no. We can’t believe an official GM social media account would drop such a bombshell in broad daylight, even under the guise of a random sketch. But hey, stranger things have happened.

However, we do see design cues similar to the Lyriq, along with an overall width and a lower grille opening similar to the GMC Hummer teaser. Combined with our confirmed knowledge of a Hummer-based electric Caddy in the pipeline, there’s certainly enough evidence to raise an eyebrow or two.