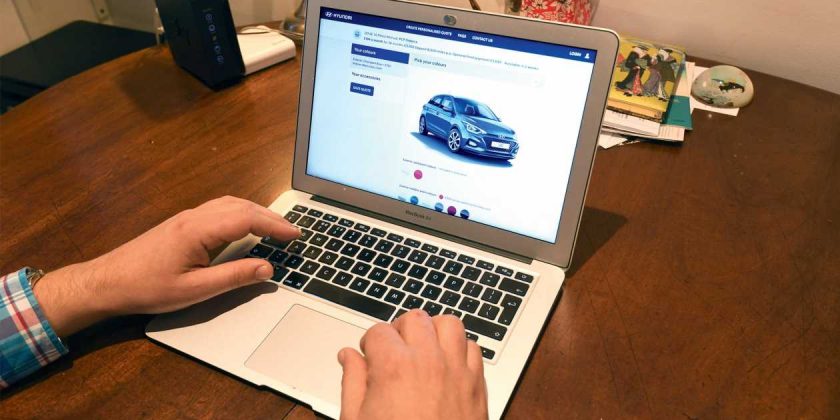 Thanks to the latest tech, new car test drives are coming to your door. We take a look at some of the best online car dealers 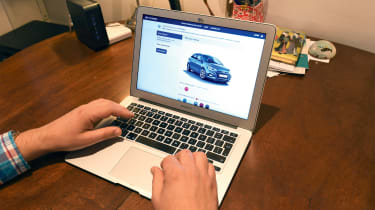 Imagine a future in which you can order a test drive as easily as you can an Amazon delivery – or one where you can have a car delivered to your house without ever having seen it, let alone driven it. How about being able to put any model you like on your driveway, instantly?

If that sounds like a brave new world, we’ve news for you: the scenarios described above are all possible, and we’ve tried out some of the schemes currently available to see how they work. We’re talking about the dealership of the future; the dealership that comes to your house.

We start by asking for a car to be delivered to our home courtesy of Mazda’s MyWay. Set up in 2015 for customers who don’t live near a dealer, the internet-based scheme asks you to book a time slot online. Then, a gleaming Mazda 6 pulls up outside our house.

Senior MyWay brand champion Yaqub Begh starts off with a five-point tour of the 6, pointing out features introduced by the model’s recent facelift. He shows us the space in the rear seats and the boot, before opening the driver’s door for us to climb in.

The test drive is next, and when you’re motoring on familiar roads, you can concentrate more closely on the way a model behaves. We know, for example, how our personal car copes with a specific pothole; driving over the same imperfection in the 6 reveals its impressive ride.

Yaqub says his customers often have a similar experience. “When people have a relatively new car to part-exchange, they often say they had a five-minute drive, and didn’t realise how bad the seats are, or how firm the ride is,” he tells us.

Test drive over, we head inside to talk prices. MyWay has four supporting dealers around the periphery of London and, after a customer has specified their Mazda, those dealers bid on it, supplying quotes within an hour, and ultimately delivering a car to the customer. 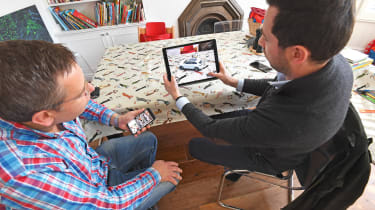 “It’s a really easy platform,” Yaqub says, adding that vehicles are collected for annual servicing as part of the package. As MyWay brand champions aren’t commissioned, it’s a pressure-free experience, too.

MyWay originally focused on Mazda buyers in London, but 2,000 test drives and 400 sales later, the service has expanded to Tunbridge Wells in Kent, and an adapted version is to be offered in Greater Manchester.

Don’t live in one of the areas covered by MyWay? How about Hyundai’s nationwide Click to Buy programme?

Originally intended as an adjunct to Hyundai’s shopping-mall outlets, the Click to Buy initiative proved so popular that the company made it a standalone model.

Tony Whitehorn, Hyundai UK’s president, explains: “We thought everybody should be able to buy a car online without having to visit a dealership.”

A quick play around with Click to Buy reveals its simplicity. We input our own car’s details in the part-exchange section, receive a realistic valuation, set a budget for a new car and are presented with finance options for the i20 and the Kona Electric.

“A number of cars are price-pointed nationally,” Whitehorn tells us. “But if you click ‘see more cars’, you’ll see models available from local dealers, and can transact on any Hyundai car online.”

Not being able to resist the lure of an i30 N, we’re taken to a model page that lists our monthly payments and nearest dealer; then we have the option to either book a test drive or order the Hyundai hot hatch.

How many people, we ask, order without a test drive? “In our city stores, just 53 per cent of customers had a test drive before buying,” Whitehorn explains. “And 100 per cent of Kona Electric customers have bought without having one, because it’s only being sold online.”

Whitehorn stresses the Click to Buy service is not intended to replace the manufacturer’s garages. “You go to a dealer to pick the car up, or the dealer delivers it to you, and you cement a relationship,” he says. 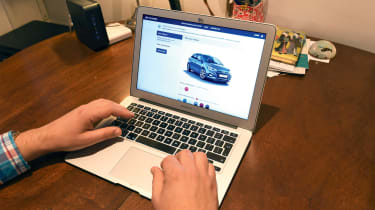 The boss is keenly aware, though, that buying habits vary between generations. “My kids wouldn’t go into a dealership to buy a new car, but my parents wouldn’t buy a car online,” he explains.

The 700,000 visits Click to Buy saw in the first 10 months of the year may have only resulted in 652 sales, but Hyundai is confident those numbers will only increase as digitisation grows. “It takes time; I get it,” Whitehorn says. “When you’re at the vanguard of something, there’s always work to be done.”

Another company at the vanguard of car sales is tech firm ZeroLight. It specialises in augmented reality, virtual reality and high-definition car visualisations, working with the likes of BMW, Pagani and Porsche, and recently developing a real-time 3D online configurator and virtual reality service for Audi.

The aim is to make car buying more immersive, accurate and engaging for would-be customers.

ZeroLight’s chief marketing officer, Francois de Bodinat, tells us that the sheer number of options and configuration possibilities available today makes it hard for buyers to get an accurate idea of what their car will really look like.

“When you change the wheels, the paint, the interior colour, have a roofbox, a bike rack, there are a massive number of configurations. There is no way that you can really see the final car before you buy it,” Francois says.

ZeroLight’s answer? Create a bespoke ‘digital twin’ of the car being configured, which displays every one of the options specified by a customer. This 3D model can then be consistently rendered on a 4K screen or virtual reality suite in a showroom, on an online configurator or, as we’re about to see, in customers’ homes. 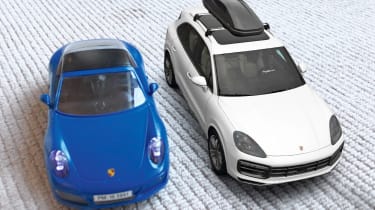 Francois helps us design a Porsche Cayenne on a conceptual configurator. We specify white paint with a brown leather interior; then, after a couple of taps on the iPad, the Cayenne ‘appears’ on our kitchen table.

The effect is uncanny. On the tablet’s screen is a live-stream video of our table, together with a 3D Cayenne. So convincing is the visualisation that when we point the iPad at my son’s Playmobil Porsche 911 Targa, it’s hard to tell which model is real. But the show isn’t over yet: also displayed on the screen are an accelerator, brake pedal and steering wheel. These act as a remote control for the Cayenne, which is soon ‘driving’ all over the table.

We head outside next to see how the car would look on the road – the model’s size can be adjusted with pinch-to-zoom – and get a bit carried away. Wouldn’t an Audi RS 5 look nicer outside the house? No, wait, let’s go really high-end; how about a Pagani Huayra?

This augmented-reality app isn’t available to the public – yet – but the tech is ready and waiting for a car company to buy it. “There is no technical barrier to it,” Francois says.

MyWay, Click to Buy and ZeroLight offer something buyers have always put a huge price on: convenience, now bolstered by the limitless opportunities of the internet. While physical outlets remain the norm for the moment, the dealership of the future looks set to be moving into your home.

Online car sales are up by 50 per cent every year

“For dedicated petrolheads, buying a car sight unseen may remain unthinkable, but our research shows that most drivers are open to cutting out the hassle of traipsing round dealerships and haggling,” says Austin Collins, MD of our sister site BuyaCar.co.uk.

“Online sales of new and used cars at BuyaCar.co.uk have doubled annually since 2014, so it’s unsurprising that more firms see this as the future.

“Buyers can choose from tens of thousands of cars anywhere in the country (there’s a standard nationwide delivery charge), comparing finance quotes is easier than in a dealership and distance selling laws mean there’s a 14-day guarantee for online purchases. This applies whether you’re buying a car or socks from Amazon.”

Do you think buying a car online is a good idea? Let us know your thoughts below…