Darn Mick Yonkers! Leave it to that rascal to go and buy the exact car Joe Koski wanted a 1967 L79 Chevelle, down to the color and all. Both gearhead guys ran together on the loud streets of Chicago, growing up during the 1960s. Among their friends and Chevy-lovin’ crew, there was one take on performance: small-block. “They seemed to deliver lots of horsepower without breaking as much as the big-blocks,” explains Joe, who still lives in the Windy City. “Of course, we all knew the great things Grumpy Jenkins and Dave Strickler were doing with them at the dragstrip.”

When 1967 rolled around, Joe was ready to buy his own car (returning his dad’s 1965 Impala). He searched high and low for what he wanted most, a 1965 L79-equipped Chevelle. “I liked the power, and a lot of that was due to the cam, pistons, and the Holley on an aluminum high-rise manifold,’ he says. “Those small-block motors sound and perform great. I still dig the sound of a car with a performance camshaft at idle.” Turns out, he wasn’t alone. Even used, those special Chevelles were few and far between, leaving Joe no choice but to pony up and order one new. “I finished the spring college semester, returned home, and was all prepared to go place my order,” he says. His family’s dealership of choice was nearby Brigance Chevrolet, home of Chicago muscle car sales icon Mr. Ed Schoenthaler.

Then came the news of Mick Yonkers and his shiny new ride, and Joe’s plan screeched to a halt. “I always took Mick for a Mopar man since he drove and raced his father’s 1965 426 Wedge Coronet,” says Joe. “Turns out, he liked Chevys, too.”

Mick’s move ended up being a blessing in disguise. It led Joe to the car he would come to cherish for life.

Wanting to be different from his pal, Joe waited to see what the 1968 Chevelle redesign would bring. His hopes rose when news broke that they’d have the L79, but those hopes dropped fast when he learned it would lack the aluminum intake and Holley carb. “Back to the drawing board I went, thinking, How else I could get that combo?” Ruling out the pricy Corvette, within the Chevy lineup those power parameters zeroed his search to just the Camaro Z/28. 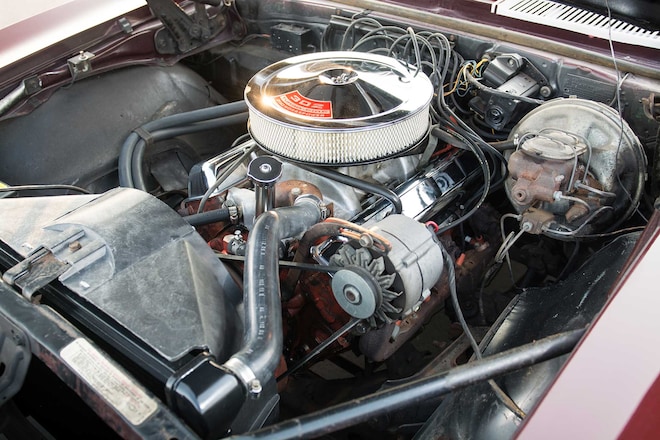 Joe was in a great spot to see those cars up close. That summer (and the summer of 1969), he worked at Brigance. Most days he could be found in the parts department, then the service department, answering customer calls, bringing cars to mechanics, and occasionally filling in as a service writer and drafting work orders. The daily tasks changed but not the high-powered machines constantly around. “All day long I was surrounded by nothing but performance,” he recalls. “The dealership was moving 435-horse Corvettes and 396/375-horse Chevelles, Camaros, and Novas all day long. I’d come to work on Monday, and first thing in the morning we’d be loaded with cars that had been to the track on Sunday and already needed repair.”

One of the guys responsible for moving that Chi-town muscle was salesman Len Dudas. He was the Koski’s go-to guy, and naturally, Joe sought him to order his 1968 Camaro Z/28. Joe was all of 19 that May, with his birthday just around the corner.

Black was his first choice of paint color, but because it was unavailable, he selected his second favorite, Cordovan Maroon. “That matched Dad’s Impala, also ordered from Len,” says Joe.

Most of his limited teenage budget was taken up by the car’s base price, but he dug deep and tacked on a few options, including tinted glass and an AM radio. Like most heavy right footers buying these cars, Joe left off power steering. “Any added belt on the drivetrain was robbing horsepower,” he recalls with a smirk. “That’s not something I wanted.”

The sports car was delivered on a glorious Memorial Day weekend. Right away, Joe saw firsthand how little people knew about the new Chevy offering. “Driving home, I pulled into a Shell station to refuel.” A curious attendant came out and recognized the car, but because of the stripes he couldn’t figure out just what in tarnation it was. “He walked around and around then finally saw the fender badge,” Joe says. “He paused, looked up at me, and said, ‘What’s a Z-2-B?’”

While many folks Joe encountered sought to know what the car was, many more cared to know what it could do. “People constantly wanted to see how fast it was on the street. I always made sure the motor was in tune, just in case something came up.” 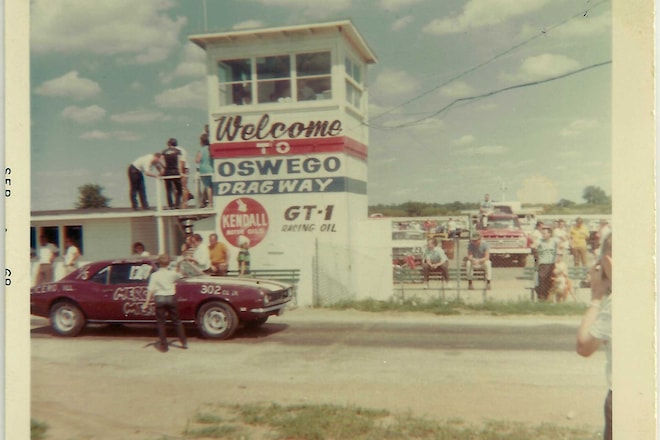 He got plenty of street time to dial it in, but even more on sanctioned strips. On any given warm weekend, he’d be at Oswego Dragway in Oswego, Illinois, competing in the E/Pure Stock class. “You’d remove the hubcaps and trim rings, pop on your seatbelt, and with street tires and closed exhaust, you’d be off and running.” The gearhead was constantly lining up against 400 Firebirds, Road Runners, Super Bees, and ram air 4-4-2s, fighting to be competitive.

“The Z’s tires weren’t wide enough for getting off the line well,” Joe remembers. “I’d pop the clutch at 3,000 rpm and feather and dance with the throttle. Once they hooked and I got going, I’d be fine.”

Although they were close to home, the track’s pits weren’t paved and were quite dusty. “It was never fun lying under the car in dirt.” After hearing of Union Grove, Wisconsin’s Great Lakes Dragaway and its asphalt-coated lots, Joe started frequenting there, as well as the US 30 Drag Strip, just over the state line in Indiana. 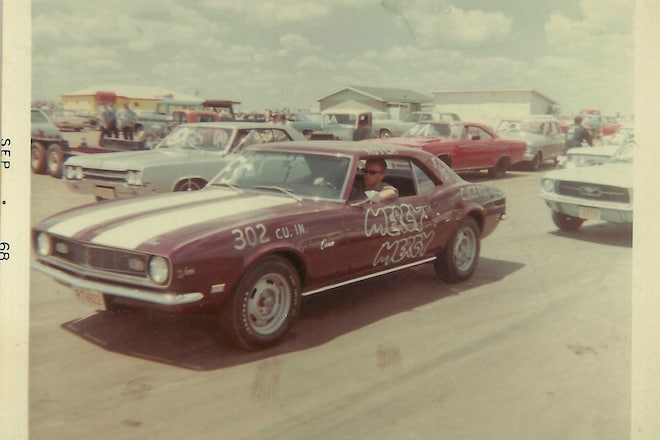 His biggest boost in top-end power came from a trip back to the dealership. “Once the car had its 1,000-mile warranty check-in, off came the smog pump and belt,” says Joe. “The parts department sold plugs that fit perfectly into the exhaust manifold.” Another trick he did was swapping in six-cylinder distributor springs, which were stiffer and kept better timing.

When Joe slowed down, he’d be found cruising to the local Topps Big Boy on Ogden Avenue. “I’d back in with the parking lights on and watch the other muscle cars parade through.” The joint was known for juicy burgers, but Joe would instead grab a steaming-hot pie from down the street at Villa Nova, a pizzeria still in business today. 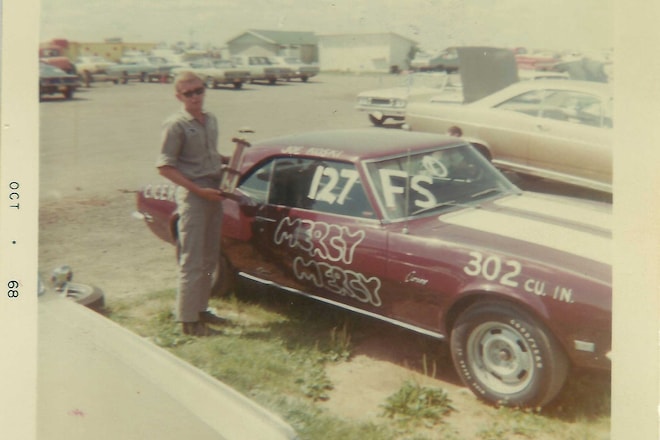 Summertime in the Z was splendid, but come those frigid winters things got dicey. “With those skinny tires, that engine power, and rearend, I’d spin on frost,” Joe recalls. Helping him further take it easy was the 4.88 gear he installed in the rearend. He did it to own stoplight romps, but it did make his highway drives more relaxed. So much so that on December 22, 1969, Joe was interstate cruising, heading home from college, when his mirrors lit up blue and red. “The officer pulled me over for going under the speed limit. I explained the situation and the state trooper laughed, letting me go with a warning.”

Joe would go on to get his degree, leaving Brigance Chevrolet and moving on to his teaching career. His first position was teaching math at the Thomas Middle School in Arlington Heights. Now with a 30-mile commute, Joe sourced a well-loved 1957 Chevy Nomad to drive daily. 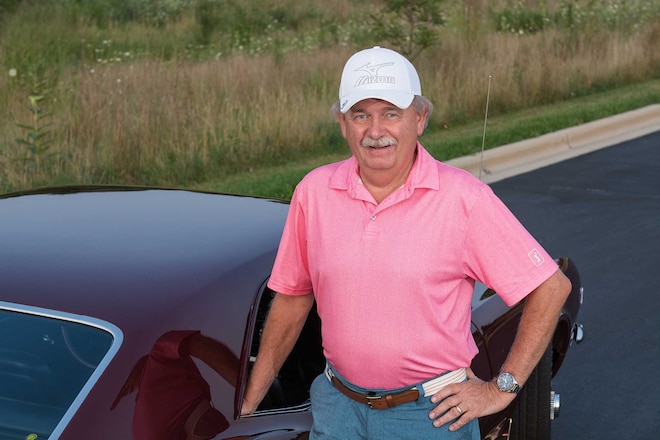 Wedding bells tolled for Joe in 1975, followed by four kids in the years to come. The new dad kept the Camaro around, always figuring out a way to keep it garaged. “My single buddies, like Mick, would go from one fast car to another, kidding me that it was time for something,” says Joe. “I’d always reply that my kids are going to drive my car. Sure enough, it’s been around long enough for that to happen.” 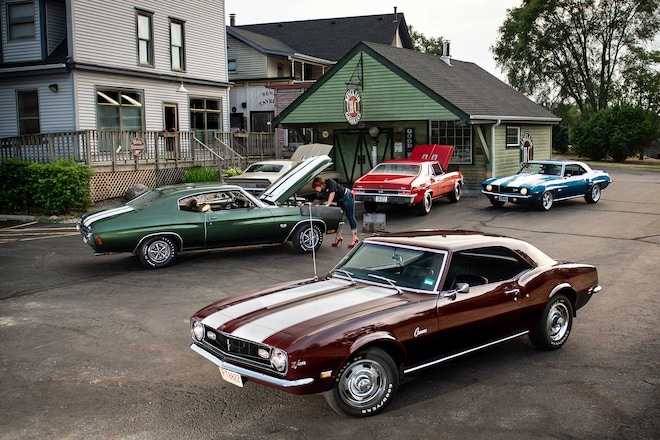