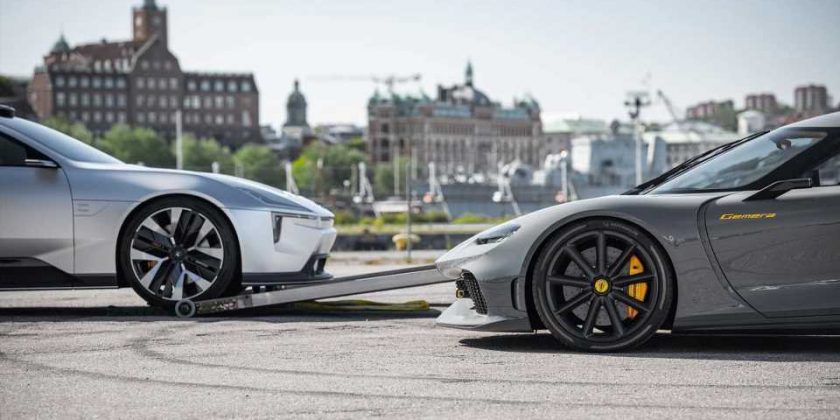 It was on this day that they met up and took the teaser shots for their partnership announcement.

In the fast paced automotive industry, business-related talks often take priority over the more philosophical side of things. Large manufacturers that are industrial giants in their own right don’t really think about the philosophy of what they do, at least nowhere near as much as smaller automakers for whom it actually takes precedent over the business side of things.

Maybe this is the reason why so many small automakers launched by visionary enthusiasts fail, because they don’t anticipate the hurdles posed by actually keeping the company afloat. That’s why when it comes to small automakers, running these companies draws a ridiculously fine line between its founder’s romantic ideals and actually selling cars in order to keep developing and building new cars.

Koenigsegg is a standout example in this respect, because its cars have undeniable romantic allure, while at the same time being cutting edge products that in some ways are quite a bit more advanced than what the establishment is doing. Proof of this is the Swedish supercar maker’s interest in electrification and the fact that it chooses to tread its own path and try new things instead of adapting and copying what others have done.

One can’t help but think of the very interesting Regera plug-in hybrid, which has one (very tall) gear that takes it from naught to its top speed. In the process, and especially at lower speeds, it is aided by an electric motor to help fill in with torque where the gas-burning V8 couldn’t manage to do so; that’s such an innovating thing to do and it reinforces the company’s very unique ethos.

But Koenigsegg is not the only new Swedish automaker interested in electrification. Polestar, which was a separate company that built Volvo-based race cars, was eventually bought up by the manufacturer, then reimagined and relaunched as its sporty division with its goals set firmly on electrification.

Polestar is on the verge of starting deliveries of its first production EV, called Polestar 2, but a few weeks back it announced that it was teaming up with Koenigsegg. Back then all they said was that ‘ something exciting ‘ was happening on Sweden’s west coast and we didn’t really know what it meant.

Now we still don’t know, but we for the first time get to see exactly when the shots they posted back then were taken. They could still be teaming up for some sort of joint project, although at the same time they could have just been talking about the fact that they are already working on exciting projects separately.

This video posted on the official Polestar YouTube channel doesn’t bring us any closer to answering that question. However, it does shed some light on the thinking behind these two companies and their driving philosophies; how they are similar and how they are different.