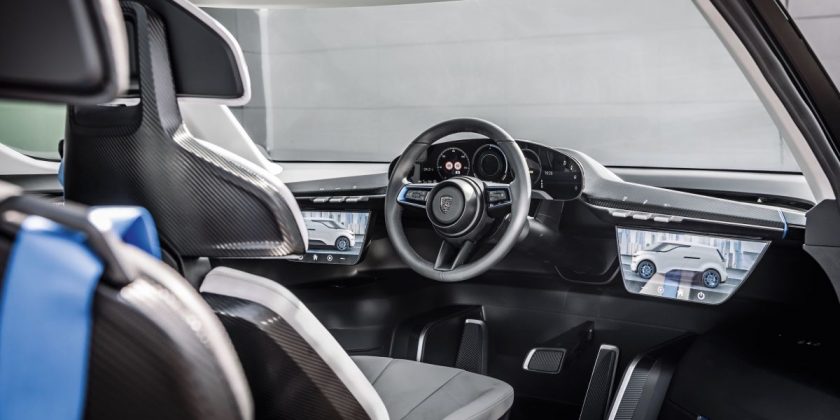 Remember the Porsche Renndienst concept from last November? A six-seater family MPV concept that Porsche secretly made? Well, it is back, but the goal this time is for the automaker to give us a glimpse of its take on how vehicles of the future would look like – from the inside.

Let’s start with the cockpit. Here, we see just a single seat meant for the driver, with displays on either side for the passengers. Like in most futuristic concept cars, the driver seat can be swiveled 180 degrees with the flick of a wrist, turning the cabin into a living space for family and friends. Porsche calls this the modular travel cabin, and you’ll soon see why.

The big guns at Porsche – user experience design director Ivo van Hulten, chief designer Michael Mauer and interior design boss Markus Auerbach – got together to create a space full of functions that may be of interest in the future. But again, like most cars of the future, it’s deliberately designed to be a place where people can retreat to unwind, like a protective capsule, Porsche says. The sides of the Renndienst are asymmetrical. One side is closed, while the other enjoys a large window bank for an unobstructed view of the outside world. Passengers in the middle row sit in ergonomically shaped bucket seats, and they each get a clear forward view. The rearmost bench features floating head restraints, which promotes an unimpeded view through the rear window.

Auerbach adds that the seats in the van have been designed for movement, and the entire space resembles a lounge. “The bench seat allows a different sitting angle due to its curved sides. We can turn towards each other. It is a particularly communicative area that invites relaxation, offering alternative seating positions for talking, working, and relaxing.”

Renewable materials will be extensively used in the cabin, such as wood, recyclable metal and sustainably produced plastics. Smart materials that respond to “external factors and light up without being directly illuminated” or the kind that “repeatedly changes shape to perfectly fit the ergonomics of the occupants” will also be a part of the interior.