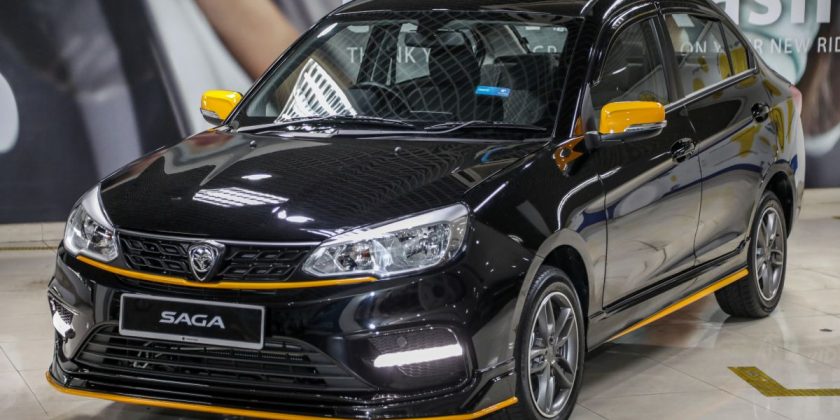 It didn’t take long for Malaysian car buyers to warm up to the Proton Saga Anniversary Edition, as the national carmaker has announced that it only took five days for all 1,100 units to be sold out. The special edition model was first launched on July 9, 2020 to celebrate the Saga nameplate, which turned 35 years old on the date.

All 1,100 units are based on the existing Premium AT variant, with some model-specific design elements to make it stand out in a crowd. For starters, the Quartz Black paintjob is unique to the Anniversary Edition, as it is not offered for the normal Saga line-up. In fact, the colour is only applied on cars that Proton makes for the government as well as the X70 Merdeka Edition‘s roof.

For contrast, the car features yellow highlights on the grille and lip portion of the front bumper, while the side skirts and wing mirror caps also get the same treatment. The choice of yellow is a nod to Proton’s motorsports division, R3, and you’ll also see it in the lower apron of the rear bumper. Rounding up the list of exterior enhancements is a set of 15-inch five-twin-spoke alloys in a matte grey finish instead of the shiny look found on the Premium AT.

Moving inside, the yellow-on-black theme continues with bright highlights seen on the instrument panel, the bezel of the storage cubby beneath the air con vents and on the tips of all four AC vents. Additionally, the previous silver trim around the vents and the touchscreen head unit surround has also been swapped out for gloss black units. There’s also a new N95 cabin filter, which is now standard for the entire Proton range of vehicles as of July 9.

No changes under the bonnet, as the Saga’s 1.3 litre four-cylinder engine still pushes out 95 PS and 120 Nm of torque, paired with a Hyundai-sourced four-speed torque converter automatic. The latter came as part of the Saga’s facelift in 2019, replacing the old CVT.

Every Anniversary Edition is priced the same as the Premium AT despite the added goodies, so that’s RM39,300 on-the-road without insurance – this factors in the current 2020 sales tax exemption. However, the bodykit, which consists of a front chin spoiler and side skirts (all three pieces have yellow stripes) is a RM2,035 option (RM315 off the normal price of RM2,350).

The bodykit can be fitted to all 2019 Sagas, but you can only have it in black/yellow, at the normal price. Also included in the package are door visors, NVH insulation for the bonnet and boot, and a plastic boot tray. With the option included, the Anniversary Edition’s price goes up to RM41,335.