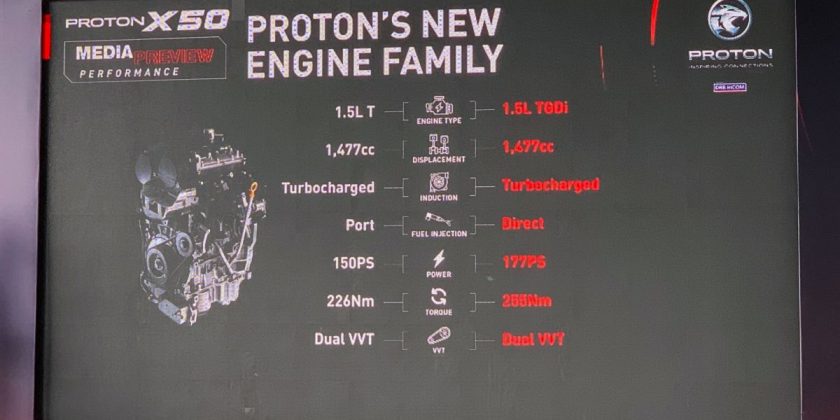 More details have emerged about the Proton X50 from the short media test drive the automaker is holding for the SUV today. One of these is the confirmation that the X50’s 0-100 km/h time will mirror that of the Geely Binyue (or Coolray), with a claimed 7.9 seconds for the century sprint.

The X50 will be powered by a 1.5 litre three-cylinder turbocharged engine, developed by Geely and Volvo, with two variations being offered on the SUV. The first is a direct-injection unit called the 1.5 TD (designated 1.5L TGDi on the X50), which will only be found on the Flagship, the range-topper in a four-variant line-up.

As shown in the specification slide from the presentation deck today, the Proton output tune for the unit is listed as 177 PS (or 174 hp), with torque remaining unchanged. It was previously revealed that this lower output figure for the 1.5L TGDi is quoted when RON 92 petrol is used, so it could be that the 177 PS rating Proton is going with reflects the lower output denominator. The automaker also took the opportunity to list out the output response from both engine variations in the form of power and torque curves as well as highlight the measures taken by Geely to counter a three-cylinder engine’s inherent character. These technical specifications have been detailed in our previous post, which delved into the downsizing route taken by the company.

We’ve already covered the X50 extensively from the first media preview, and you can check it out here. We’ve also detailed the spec-by-spec differences that have been revealed prior to today, but expect more to emerge following today’s drive preview.