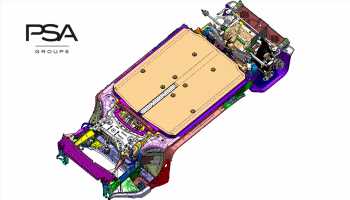 Peugeot has revealed more details on its newly-announced eVMP or Electric Vehicle Modular Platform, which is set to be rolled out in the next few years. From now until 2025, the group will shift its passenger vehicle line-up (comprising various platforms) to just two 100% electrified platforms.

It says the eVMP will be used for larger C- and D-segment cars, and offers an industry-leading battery storage capacity of 50 kWh per metre of wheelbase. Based on current battery technology, the PSA Group estimates that the largest battery fitted into the eVMP will provide up to 650 km of range based on the WLTP cycle. The platform can also be used to underpin plug-in hybrid cars.

While it is technically an all-new platform, eVMP is essentially a heavily reworked version of the existing EMP2 architecture, yet retains some sub-assemblies and high-performance battery modules. The industrial process has also been synergised in its plants, so R&D and tooling costs are kept low.

Company R&D director, Micolas Morel said: “With this eVMP platform, Groupe PSA once again demonstrates its ability to innovate by developing for its customer’s state-of-the-art and affordable technologies thanks to the frugality that has enabled a significant reduction in R&D and industrial investments.” “This global platform will make it possible to offer a range of vehicles that are perfectly respectful of the environment, meeting the changing expectations of our customers and guaranteeing driving pleasure and safety on board, values that are the basis of the Group’s reputation today,” he added.

Meanwhile, the first eVMP-based car is rumoured to be the next-generation Peugeot 3008 SUV. Powertrain options include a single- or dual-motor setup, giving customers a choice of front-wheel or all-wheel drive. The single-motor version will likely use the existing 134 hp electric motor, while the twin-motor setup is expected to dish out anywhere from 300 hp to 350 hp.

Despite ramping up production of electric cars, PSA Group said its internal combustion engine will continue to be manufactured and used for various cars it sells around the world.