After reading many features about why and how many people build and certainly love classic trucks, they are usually much more than carburation and transportation workhorses. For some they represent lifelong dreams, blasts from the past, or they can simply serve as therapeutic bridges to the future. For Mark Postula, C10s have been all of those things over the last 34 years.

After selling a stepside that was recently featured on these very pages, Mark found himself building this 1963 Fleetside as a healthy transition after a difficult divorce. It originally came to Arizona as a small-window shell from a field in New Mexico, but was headed for new life after a $2,000 offer from Mark. It also had something that really resonated in him being both a Marine and former police officer; it had both of these organization’s stickers prominently displayed on it and at that moment, “It was on!”

Built in under four months and nearly all by himself, he started with the frame, which was sandblasted and painted satin black. He used the crossmember, brakes, power steering unit, and sway bar from a 1983 Silverado up front with McGaughy’s 2 1/2-inch dropped spindles and one coil cut off the springs. The guys from Premiere Performance in Prescott dialed in the 10-bolt 3:42 and added factory disc brakes, also donated by a Silverado. The rear suspension has a 1-inch C-notch and CPP lowering blocks with a 4-inch lowered spring that balances the slightly raked stance. 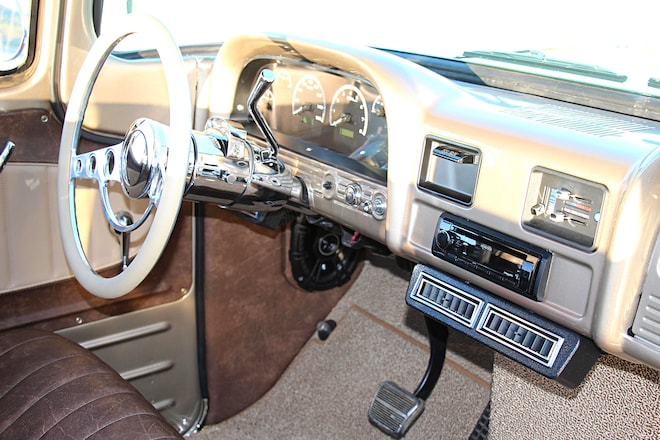 The powerplant is a 2001 Camaro LS1 coupled to a 4L60E unit that came by way of a good friend, looking factory fresh and sporting Corvette covers. The standard-issue aluminum “241” heads pack a punch in the LS engine family and provide a conservative 325 horses for plenty of tow and go. Mark used stock LS3 exhaust manifolds coupled with a 2 1/2-inch stainless system built by Bill Keeling at Arizona Exhaust in Prescott, Arizona. Flowmaster three chamber mufflers provide that unique throttle-induced rumble to roar muscle car sound. Mark has installed this combination in a few of his past builds with a knack of making them look factory built, running to driving in a weekend. Rolling stock wasn’t an option, so instead he used classic 20-inch American Racing Torq Thrust wheels in each corner, 8-inch wide up front followed by 10s in the rear.

The shell was mostly complete and in good shape for body and prepwork, but he decided to replace the front fenders and bedsides to save time and energy for a bigger project. The truck was originally a small-window version and Mark challenged himself to convert it the popular big-window variety. With all the panels straightened out and ready for paint Mark chose Diamont Uno Candyapple Red, a color choice that certainly suits the nostalgic iron. The cab is accentuated by Ermine White with pewter interior/exterior offsets that really creates an eye-popping combination. In the bed Mark built a clever factory-looking housing for the fuel filler versus the more common floor-mount style. Following the uncommon theme, he bought some Red Oak hardwood from Home Depot and custom fit a sweet naturally stained bed floor. He painted the strips the pewter accent color and the fit and finish looks every bit as good as aftermarket offerings! The interior features an artfully crafted design by Jim Mercado, the owner of “The Upholstery Guy” in Chino Valley, Arizona. Distressed brown is the name of the color, but it’s very calming, stitched on the door panels and Snowden bench seat. Jim also made kick panels that wrap the look from door to door. Dakota Digital gauges display the drivetrain’s vital signs and the dash houses a clean radio and A/C panel layout for the Old Air Products climate-control unit.

Mark’s C10 is a fine example of another totally homebuilt gem and Mark says he wouldn’t change a thing about the build. He has already put over 1,000 miles on it since completion and was recently praised at the C10s in the Park show in Texas. It won a “Top 50” award out of 850 in attendance and although it was the first accolade for the newly completed 1963, we’re sure it won’t be the last. CT 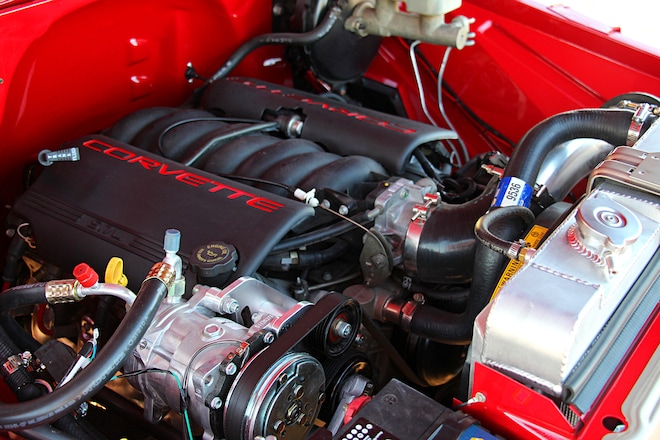