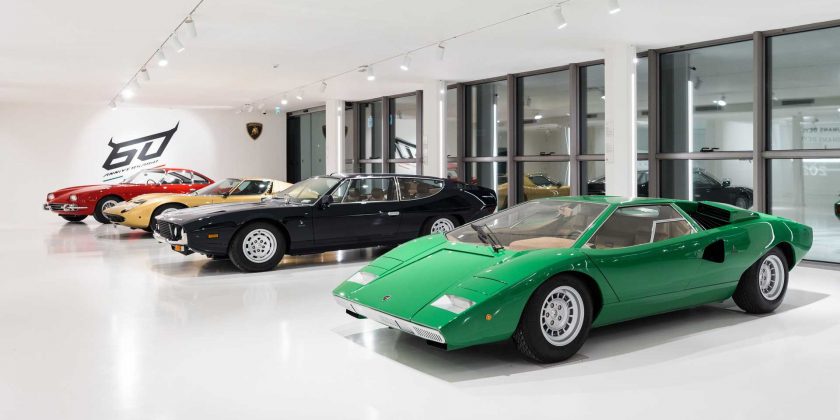 2023 is a special year for Automobili Lamborghini. The Italian supercar brand from Sant’Agata Bolognese turns 60 years old, and to kick off the anniversary celebration, a revamped version of the official Lamborghini Museum opened its doors to show off over a half-century of supercar evolution.

For those not in the vicinity of Lamborghini’s headquarters in Northern Italy, the automaker released a healthy collection of photos showing the finer points of its restyled museum. The multi-level building features 19 vehicles spanning Lamborghini’s history, strategically parked amid glistening white floors and walls. A new exhibit called The Future Began In 1963 specifically highlights the birth and evolution of the company, highlighting milestones and significant vehicles through the years.

The museum identifies three main categories of vehicles: Heritage, Contemporary, and the oddly-named Few-Off. Of course you’ll see a Miura and Countach with the Heritage group, but a 350GT, Urraco, Espada, and the off-roading LM 002 are also there. Contemporary covers all primary Lambos from the last 20 years or so, starting with the Diablo GT and wrapping with the Urus. Few-Off is where you’ll see special models like the Reventon, Sesto Elemento, and the latest Countach LPI 800-4, among others.

The museum also includes plenty of Lamborghini V12 engines to see up close. Historical displays present information on everything from specific models to factory expansions and Audi’s connection in 2001. There are interactive areas, and the museum includes race cars as well.

With its reopening, Lamborghini says the new museum is just the start of numerous special events and celebrations planned throughout 2023. The nature of these events, however, isn’t mentioned.

“2023 will be a year full of original activities and developments, which opens with this new museum destination,” said Automobili Lamborghini Chairman and CEO Stephan Winkelmann. “We will celebrate our first sixty years through international events, initiatives, and unexpected activities, which we will reveal during the year.