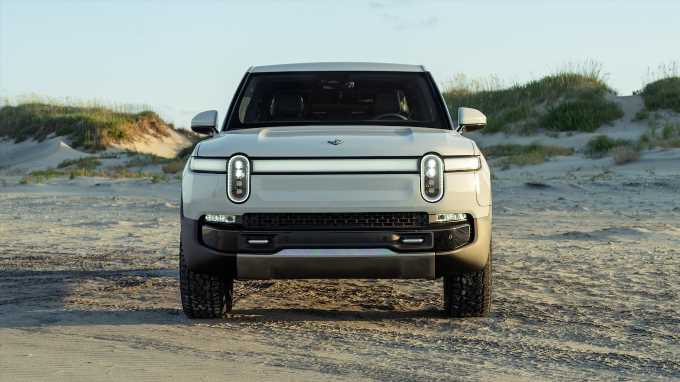 Rivian, the relatively young electric car company that is releasing the R1T EV pickup as we write this (the related R1S SUV follows soon) has big plans. Yes, electric 4x4s themselves take a huge portion of the company’s attention, but the automaker also has its eyes on supporting the R1T and R1S with chargers. Rivian is planning a multi-layered charging network that, if not exactly like Tesla’s, at least brings similar capability to the table via a mix of DC fast chargers, 240-volt Level 2 chargers, and home chargers. Rivian even expands on Tesla’s network with the existing tens of thousands of compatible quick chargers and Level 2 hookups already scattered around the country by third parties such as Electrify America.

Where and How Will Rivians Be Charged?

So, what exactly will charging a Rivian look like? In the immediate future, that existing public charging network—the one created by Electrify America, ChargePoint, EVGo, and the like—will ensure Rivian owners can get up and running out of the gate. Owners also can purchase an in-home charger that is functionally and mechanically nearly identical to Rivian’s so-called Waypoint chargers, 10,000 of which will be scattered near public shopping, lodging, and outdoor locations by 2023. These Level 2 units are capable of up to 11.5 kW of charging and utilize the common J1772 plug design, meaning they can work with non-Rivian vehicles, too; Rivian says it plans to make its Waypoint chargers open to non-Rivians. Prices for charging will vary—the units can be installed by state and national parks, local businesses, etc., and those who choose to add one to their location can set the charging terms. All Level 2 chargers we visited during our cross-country trek down the Trans-America Trail were free—even to non-Rivians.

Every Rivian also comes standard with a “portable charger” that can plug into conventional 120-volt household wall outlets (for a very slow Level 1 charge) or a 240-volt hookup like those that power your clothes dryer; such 240-volt plugs also exist at campsites and RV parks everywhere, and they can add up to about 16 miles of driving range to a rivian r1t per hour of charging.

The real action is in fast charging, and to that end, Rivian is installing more than 3,500 DC quick chargers at 600-plus locations in the U.S and Canada by 2023. These speedy chargers can add up to 140 miles of driving range to a Rivian in just 20 minutes; early on, R1Ts and R1S SUVs will “only” be capable of a 190-kW peak charge rate, though we’re told this will later increase through 200 kW and on to 300 kW or more “in the future.” Each of these sites will deliver juice sourced from “100 percent renewable” energy production, and unlike the Waypoint and home chargers, they’ll be exclusive to Rivian customers.

Rivian is calling this DC charger system the Rivian Adventure Network. Designed to complement existing DC fast charging infrastructure, like the type we used on our Trans-America Trail journey, it balances urban locations with farther-afield sites to facilitate off-road adventures—plus regular adventures who happen to include interstate travel and transiting longer distances. A map on Rivian’s website depicts proposed Adventure Network locations as dots scattered across the continental U.S., with clear pathways east to west, north to south, and so on along major arterial routes. There are DC chargers planned for Alaska, though their numbers appear few, and so far none between the Vancouver area of Canada and the far-flung state are included in Rivian’s plans, meaning a drive to Alaska will require Level 2 chargers and a less hasty pace. Hawaiians, rejoice: Rivian has DC chargers planned for several islands there.

Filling in the Gaps

Of course, before Rivian gets around to fleshing out its homegrown charging plans, there’s always the existing public EV charging network. These charging stations are fairly blanketed across the country but are managed by a patchwork of dedicated apps, including PlugShare, Electrify America, and others. This means to use each one, you typically need to have the attendant app on your phone; many chargers, particularly fast chargers, have on-site payment options—just like, say, a gas pump does—but a seamless experience this is not, even if you go with electronic payment.

During our cross-country Trans-America Trail adventure, we encountered wildly variable user experiences at Electrify America chargers. Some didn’t work properly, others refused to connect with our apps, and numerous chargers wouldn’t deliver their full potential output; several 150-kW and 350-kW chargers delivered way less than their ratings despite the Rivians asking for more power, leading to longer-than-anticipated charging stops. Your experiences will vary, too.

The good news is, despite the multiple apps managing access to the nation’s public charging infrastructure—Rivian has its own app, which will be available to non-Rivian customers for handling transactions at Rivian Waypoint chargers—there are a ton of these chargers across the country. There are at least 50,000 public chargers, including DC fast chargers and Level 2 units, listed on the U.S. Department of Energy’s location tracker. This roundup doesn’t include the untold number of private charging locations at offices and homes. Remember, if you don’t regularly drive long distances, a home charger should be able to handle nearly all of your EV’s energy needs; quick chargers and other public sites are merely helpful if you’re in a hurry and need a charge on the go or are transiting between far-flung places. And Rivian uses the common CCS plug standard for DC fast charging, making their vehicles compatible with a huge number of existing DC chargers in addition to its own future Adventure Network.

So, What Was It Like Crossing the Country in the Rivian?

Charging during our 7,000-mile trek across the Trans-America Trail from the East Coast to the West Coast was such a non-event, even accounting for a few faulty public chargers, that we felt more “range anxiety,” or the fear of not making it to our destination with the energy onboard for our support truck, a 702-hp Ram 1500 TRX.

Most days, we charged up just once in the middle of the day; some days, we didn’t even do that, and off-roaded from morning until evening without stopping. Keep in mind, this trip wasn’t ideal for highlighting what everyday life with a rivian r1t might be like—mostly because unless you live on a remote ranch, commune, or science station, you’ll be driving on paved roads, near chargers, and likely for shorter distances. At a few stops, we used Rivian’s new Level 2 Waypoint chargers, plugging in overnight and waking to a full battery pack. For other stops, we hit up Electrify America fast chargers, taking on significant charge in well under an hour. As mentioned earlier, some of the public chargers didn’t quite deliver their promised power output, in at least one case prompting us to switch to another charger to avoid wasting time.

If you’re looking for more detailed charging information beyond “it wasn’t an issue,” we don’t have it. Most of the chargers we used don’t track the kWh put into the Rivian during the charge—Rivian’s Waypoint chargers and a few newer public units do—and the R1T doesn’t display that kWh figure anywhere on its infotainment display, nor does it have (for now) an onboard trip computer. Really. The plain old odometer is buried several menus deep, but again, without consistent, specific data on how many kWh the truck took on at each stop, we can’t furnish an accurate kWh/mile consumption figure. (We’re reaching out to Rivian to see if it has that data from the trucks.) We will say the R1Ts, when fully charged, delivered well over 200 miles of use on the trails before needing any recharging; the R1Ts we drove came with the 314-mile-rated battery packs; a 400-mile-plus unit is coming soon and costs an additional $10,000.

This is sure to disappoint the hardcore EV followers out there, but we’ll offset it with this generalization: Save for one decision to skip a charging stop and push our luck, resulting in an arrival at our destination (we didn’t run out of juice!) with zero miles of range displayed on the gauge screen, we never once hurt for chargers or worried about range. The R1Ts simply went where we needed them to go, and advance planning (choosing which chargers we’d stop at, if we needed to at all) meant we easily made it from stop to stop. Some followers of our Trans-America Trail story have wondered what impact off-roading had on the range, and we can’t really say. That’s because we predominantly drove off-road and over challenging terrain and put down very few miles on pavement. Clearly a bigger impact on our driving range came from the hundreds of pounds of gear and rooftop tents our trucks were saddled with. Even with all that, the Rivians were capable of nearly 300 miles of range at a time if the terrain was relatively flat and we could use the Conserve drive mode—which only activates the front-axle motors, making the R1T front-drive—and avoided high speeds.

The takeaway? Charging or range shouldn’t be issues or worries for any Rivian owner. A network exists today to facilitate long-distance trips, around-town juice-ups, and the like. Rivian is expanding on that with its own dedicated network. Plus, we crossed the country, off-road, far from population centers in most cases, and exercising the R1Ts’ amazing off-road capabilities was always far more front-of-mind than any thoughts of where we’d charge up—or if we could at all. We’ll have more detailed energy usage data, range tests, and more when we get our hands on a rivian r1t for a full test evaluation on normal roads.