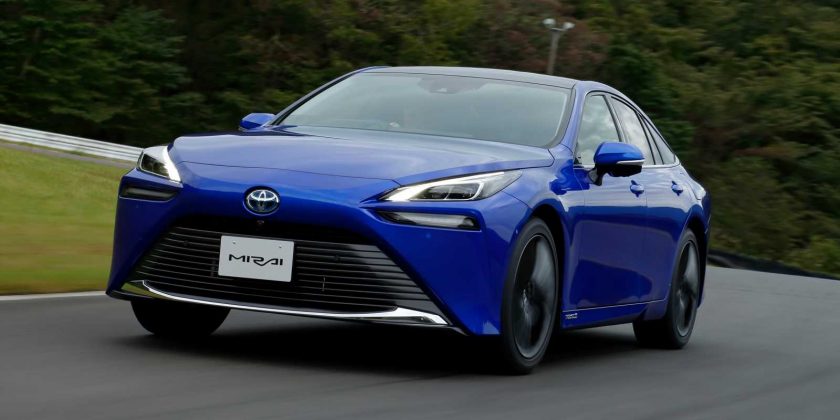 Toyota’s second-generation hydrogen-electric Mirai saloon has made its official debut. It’ll go on sale in the UK in March next year, where it’ll act as an alternative to conventional electric saloons, such as the Tesla Model S and the upcoming BMW i4.

The Mk2 Mirai, which we’ve already sampled in prototype form, has moved to Toyota’s rear-wheel-drive GA-L platform, which it shares with the Japan-only Toyota Crown executive saloon. As such, its dimensions have grown over its predecessor – its length has extended by 85mm to 4,975mm, while its wheelbase has increased by 140mm to 2,920mm.

The additional space offered by the new underpinnings has allowed Toyota to fit an extra hydrogen storage tank under the Mirai’s floor, which has increased the saloon’s fuel capacity and driving range by 30 percent. Now, the car’s three tanks can hold 5.6kg of hydrogen – providing a maximum range of around 400 miles.

This improved range figure is helped along by the engineers’ fastidious approach to weight reduction. The fuel cell stack, for example, is smaller but more energy-dense than the old model’s – while its intake is almost 35 percent lighter than before. The fuel cell’s exhaust system is also made from a lightweight resin, as it only needs to carry water rather than the high-temperature gasses produced by a combustion engine.

Toyota has also moved the car’s hydrogen fuel cell from underneath the passenger compartment to underneath the bonnet, which the company says has provided more space inside and improved the Mirai’s weight distribution. Now, the car has a claimed 50:50 balance between the front and rear axles, plus a lower centre of gravity. 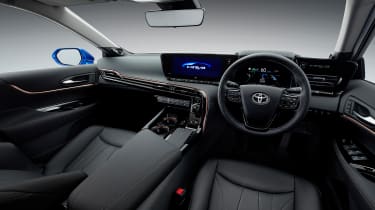 The Mirai’s electric motor and battery pack are mounted above the rear axle. It’s a heavily reworked version of the old car’s system, which features simplified wiring and improved internals. The tweaks have provided a 50 percent reduction in weight, but a 12 percent improvement in performance – with power rising from 154bhp to 172bhp.

As an added benefit, Toyota also says the Mirai’s powertrain will clean the air it drives through. The system features a fabric filter element in its intake, which captures pollutants such as sulphur dioxide, nitrous oxides and particulates measuring as small as 2.5 microns in diameter – with an efficiency of between 90 and 100 percent.

Design-wise, the new Mirai has adopted a more aggressive and sporty styling language than the outgoing model. It’s lower and wider than the car it replaces and features a more rakish profile, with a long bonnet and a sloping roofline – all of which, Toyota says, has improved the car’s aerodynamics, helping to eke a few more miles from each tank of hydrogen.

The Mirai’s cabin has received an upmarket redesign with leather upholstery, a soft-touch dashboard, a wireless smartphone charger, a new dash-mounted 12.3-inch infotainment system and a digital instrument binnacle. Also, thanks to its new hydrogen storage system, the Mirai now offers seating for five rather than four.

What do you make of the second-generation Toyota Mirai? Let us know in the comments section below…