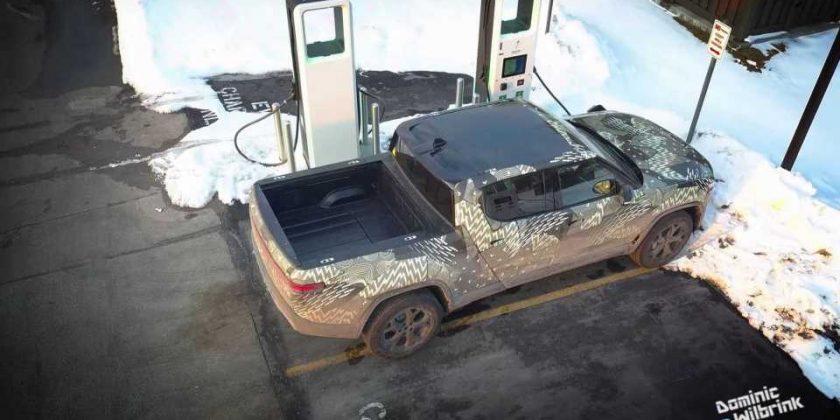 It’s pretty flat underneath, but you should not see it…

Here is outstanding footage of a camouflaged prototype of the upcoming Rivian R1T electric pickup truck, seen at an Electrify America fast-charging station.

The first question was, what is underneath the vehicle, and the author of the video recorded a bit of it, but the Rivian team quickly emerged asking him to not record the undercarriage.

Anyway, besides that, the video includes a lot of great shots from a drone from basically every angle. One thing is sure, the Rivian R1T looks great, and maybe the company should even consider selling it in such camouflage?

Dominic Wilbrink explains in the description:

“So I happened to park next to a Rivian at a charging station in Michigan. As both a truck guy and an electric car driver I was curious… but I was mostly curious about what the undercarriage looked like. Could it hold weight? Would it protect the battery in an off-road situation? Well, let’s stick a camera underneath and find out…

Let me know what you think. If you would like to know something more specific about my impressions of the Rivian, then add a request in the description below. I’ll see if I can add a follow up video based on your request.

This is not a paid advertisement. Rivian did not provide access to this for me, nor did a third party. I just happened to be in the right place at the right time and I am doing this to share my thoughts on the product.”

The entire event took about two hours, which makes us wonder what was the charging rate. Such a question already appeared in the comments section so maybe we will get the answer.