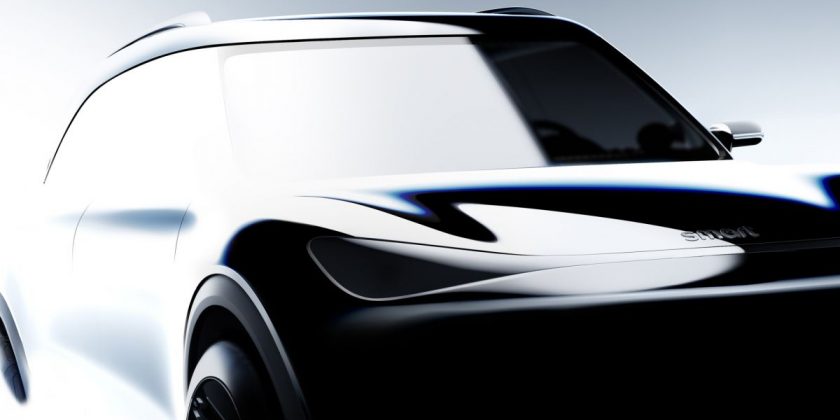 Small-car brand smart has released teasers of an upcoming SUV, which will be part of its rejuvenation plan that also includes successors to the fortwo and forfour. In January last year, Mercedes-Benz, the owner of smart at the time, announced a joint venture with Zhejiang Geely Holding (ZGH) to form smart Automobile.

While the smart line-up is known for its tiny compact cars, its first SUV will be a much larger offering, with Auto Express reporting it could be as big as a MINI Countryman. The smart SUV’s design shown in the teasers also differs quite a bit from the current line-up, with no hints of the Tridion safety cell or a grinning face.

This new look is the work of smart’s own in-house design team, which is led by Mercedes-Benz design chief Gorden Wagener. “We have taken the opportunity to reinvent the brand,” Wagner told Auto Express, who suggested that the new smart face is supposed to be “cool, sexy and grown-up instead of cute and playful”.

Nonetheless, there are still some “fun” highlights on show, including a roof that appears to “float” above the cabin like the peak of a baseball cap, helped along by “nearly invisible” A-pillars and B-pillars that are partially blacked out. Said roof also gets a contrasting colour to the body and there’s a smart logo on its trailing end.

We don’t get a view of the SUV’s interior just yet, but expect a funky cabin that should come with a feature-packed infotainment system like the Mercedes-Benz User Experience (MBUX). A good mix of standout trim options and materials should also be part of the setup inside. “Just like the current smart models, the first car of the new era will also offer a better ratio of length to interior space than conventional vehicles,” Wagener said.

Unsurprisingly, the smart SUV will feature an electric powertrain and is said to be built on ZGH’s Sustainable Experience Architecture (SEA), which is used by the group’s brands like Zeekr as well as the Volvo with its forthcoming baby SUV, dubbed the XC20.

The modular platform can support up to three electric motors and even setups with range extension in mind, plus fast charging and space for battery packs that offer up to 700 km of range Of course, given the size limitations of the smart SUV, a more conservative configuration is more likely.