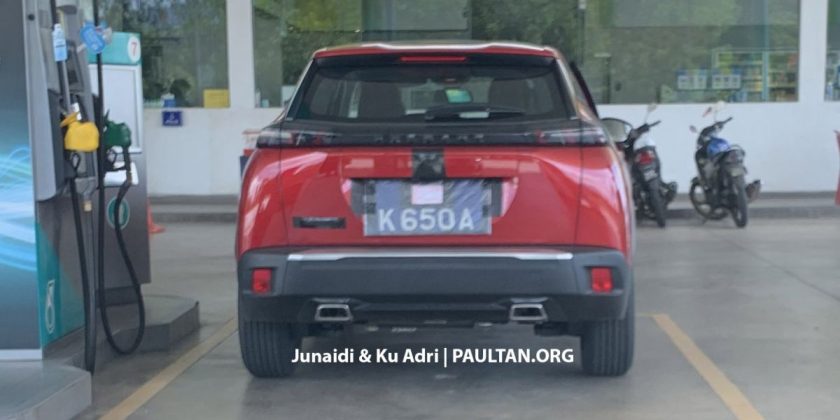 The second-generation Peugeot 2008 made its global debut in June last year as the successor to the first-gen model that we previously got here. Riding on the PSA Group’s Common Modular Platform (CMP), it’s a rather handsome-looking thing, with a design language that is similar to the latest 208 and the 508 – the former also uses the CMP architecture.

Malaysia got the first-generation 2008 way back in February, which was later followed up by the facelifted version in 2017. However, the model is no longer listed on Peugeot Malaysia’s official website – Nasim is the sole importer and distributor of the brand here – with only two models, namely the 3008 and 5008, offered currently.

However, that could change soon, as the all-new 2008 has been spotted at a petrol station in Gurun, Kedah by paultan.org readers Junaidi and Ku Adri. This particular unit is a right-hand drive unit instead of a left-hand drive one, which could suggest the possibility of local assembly.

As we all know, the Naza Automotive Manufacturing (NAM) facility in Gurun is responsible for assembling Peugeot models in Malaysia, and is a joint venture between the Naza Group and PSA Group. The plant currently outputs the 3008 and 5008, both of which were launched in August last year. Looking at the lightly-camouflaged unit, the sighted 2008 appears to be dressed in GT Line trim, largely due to the presence of those trapezoidal-shaped exhaust finishers that are integrated into rear bumper and finished in chrome.

As for what’s potentially powering this 2008, a good guess would be a 1.2 litre PureTech turbocharged three-cylinder petrol engine, which offers 101 hp and 205 Nm of torque in its base “100 S&S” tune, or 129 hp and 230 Nm in “130 S&S” guise. A six-speed manual is standard with the low-power version, while the high-power unit gets an optional eight-speed automatic as well.

The 2008 also has a GT version, which shares the same appearance as the GT Line, but its 1.2 litre engine makes 155 hp and 240 Nm, with an eight-speed auto as standard. There are also two oil burners, as well as a fully-electric version (e-2008) but these will likely not be offered here.