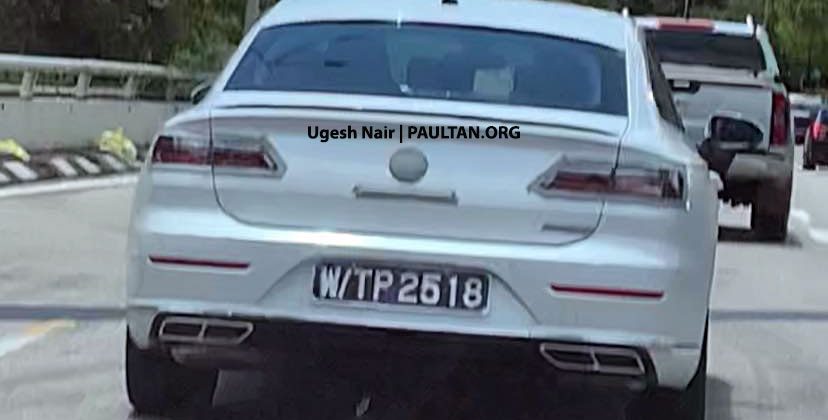 The Volkswagen Arteon was finally launched in Malaysia in August after a very long preview period, and the five-door coupe (rear access is via hatch and not a boot) replacement to the popular CC is a sleek and seductive shape. Locally-assembled in Pekan, our Arteon is in its original 2017 form, not the facelift that was just revealed in June.

But guess what, the Arteon facelift has now been spotted roaming in KL, with taped-up badges. This is most likely Volkswagen in the early stages of testing the latest Arteon, but perhaps they needn’t have bothered with the tape, because the mid-life update is very mild – Wolfsburg didn’t do much to what is an already attractive exterior.

The most obvious cue is at the Arteon’s rear – the twin tail pipes of the facelift are split in the middle to simulate quad pipes, and they are more angular in shape compared to the pre-facelift’s. Like the Arteon we get, this is an R-Line car, and like the pre-facelift, the “pipes” are merely decorative (fake). And is that a 4Motion badge being covered up?

It’s not very obvious here, but the 2020 update also welcomed revised LED graphics (five dashes instead of a straight line) and darker housing for the tail lamps. At the front, the LED daytime running lights have been extended and they now meet at the VW emblem.

A subtle change is the reduction of horizontal chrome bars on the lower half of the grille, it’s now three instead of four. No big changes overall, which will suit owners/prospects of the pre-FL very well.

The Arteon that you can buy now for RM221k (with sales tax exemption) is powered by the Passat’s 2.0 litre TSI engine with 190 PS and 320 Nm of torque from 1,500 to 4,180 rpm. The turbo-four sends drive to the front wheels via a seven-speed DSG wet dual-clutch transmission with paddle shifters. The lights are LEDs and the wheels are 19-inch Montevideo turbine-style two-tone items. Inside, the Arteon has a similar dashboard to the Passat, with a central analogue clock (the facelifted Passat ditched the clock for a badge) and horizontal layout. The upcoming facelift differs in the AC vent design (broken up instead of full width, no more clock), touch-based AC control panel, and a new steering wheel, also with touch controls.

There have been a couple of surprises by Volkswagen Malaysia of late. The Arteon being locally assembled is one; launching the Tiguan Allspace in 220 PS/350 Nm R-Line form is another. The recent local spotting of the latest Mk8 Golf GTI was almost unbelievable – the hot hatch is super fresh even in Europe; in fact, UK prices were announced just two weeks ago. Anyhow, this is a good development.