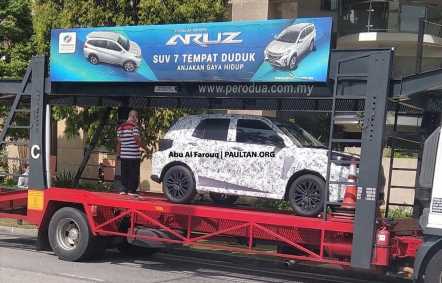 Finally! This is our first sighting of the upcoming Perodua D55L SUV, which will be the market leader’s first compact SUV since the Kembara and the limited run CBU Nautica. The image above was captured outside JPJ/MoT in Putrajaya, and it shows a compact SUV on a car transporter that clearly belongs to Perodua – it has Aruz banners.

This has been coming – we’ve heard plenty of it, albeit in P2’s typical veiled style. Codenamed D55L, the B-segment SUV is based on the Daihatsu Rocky, which is also sold in Japan as the Toyota Raize. Perodua provided Malaysian input in the development, and that’s perhaps why the Rocky’s rear end might look familiar to Malaysians.

Sitting on the Daihatsu New Global Architecture (DNGA), the Rocky is powered by a 1.0 litre turbocharged engine with 98 PS and 140 Nm of torque from 2,400 to 4,000 rpm. The boosted three-pot is paired to a CVT and sends power to the front wheels, but as with most cars in Japan, AWD is an option. The Rocky’s WLTP fuel economy is rated at 18.6 km/l for the FWD.

The DNGA platform and turbo engine are expected to feature in the yet-to-be-named Perodua SUV, along with Level 2 autonomous driving. All are next steps up from what P2 is offering now, and Perodua’s Rocky will also be the first model shared with a JDM in a long time.

We had a chat with Perodua president and CEO Datuk Zainal Abidin Ahmad on the sidelines of last year’s Tokyo Motor Show, where the Rocky made a surprise debut – plenty of nuggets here.

Perodua has already said that the D55L will not be launched this year, so a Q1 2021 debut perhaps? This story will be updated.