There are 22 muscle Mopars in the car collection belonging to Darryl and Linda Wischnewsky, with model years ranging from 1967 to 1971. All but four are Hemis or 440 Six Packs. All have been restored with original or N.O.S. parts, in addition to being all numbers matching. In this story we only look at the Mopars. Yes, Darryl and Linda also have a number of rare, high-performance Chevys and Fords from the muscle era. Here are a few of the collection’s highlights.

The Last Hemi
This Top Banana 1971 Charger R/T has been documented to be the last Charger to come off the assembly line equipped with a Hemi. It is one of 30 with this engine and a four-speed. The car was delivered to Mabe-Cartwright Motors in Welch, West Virginia, for $5,293.45. It came outfitted with a Super Track Pak 4.10 Dana axle, front disc brakes, power assist brakes, deluxe vinyl black bucket seats, a center console, chrome mirrors, a tachometer, a heavy-duty battery, the max cooling package, a fresh-air hood, dual exhaust, Rallye wheels with G60-15 RWL tires, and other optional trim work. This numbers-matching car has logged 42,000 miles but still retains all the original sheetmetal. Darryl “won” this Top Banana at the Mecum Kissimmee auction in 2015, when Tim Wellborn was selling off a portion of his collection.

1970 Hemi Charger R/T
Another Hemi four-speed Charger R/T in the collection is from the 1970 model year. That body style, combined with black and chrome skin, would intimidate any onlooker. It’s a grizzly bear on four wheels, ready to eat you up. Even the dog dish hubcaps let you know this car was built to throw stones at your windshield. The odometer shows 54,000 miles driven. Again, all of these cars have gone through rotisserie restorations, with virtually all parts original or N.O.S. Even the radio works. The black bucket seats give just the right amount of comfort (yes, I got to drive it 10 feet), and the turn signal lights embedded in the hood are a nice touch. As you’d expect, the engine and exhaust rumble match the look: muscle to the max.

Hemi ’Cudas
The majority of the Mopar collection was photographed inside the warehouse because they were too difficult and time-consuming to extract. You wouldn’t want to wear your cowboy belt buckle while walking between these magnificent Mopars, for they were fit together like Arvid Svendsen in a ’58 Corvette: tight. We managed to roll one of the three Hemi ’Cudas, a Plum Crazy 1971 four-speed model, into the aisle for a few photos. The other two are yellow 1970 four-speeds, one with sanctioned racing history. This collection also includes two 440-6 ’Cudas, but only the black 1970 model was here. The 1971 ’Cuda was at a restoration shop.

Rags to Silk Britches
Darryl began his auto career as a car salesman in 1975 while living in Houston. He’s still a car salesman (only when selling one of his collector cars, which he rarely does), and he and Linda still live in Houston, but they now also own several car dealerships. Their TV ads are memorable because the two of them appear in every one. He comes across as likeable and down-to-earth.

At the end of one row rests an iconic orange 1970 Dodge Super Bee, one of 196 built with a 440 Six Pack. This car has its all-original drivetrain with the functional hoodscoop, Sure Grip rearend, automatic transmission, and Super Bee stripe package. As with a number of these Mopars, this rare auto has been certified by Galen Govier.

Wouldn’t you love to own a black 1970 Hemi Road Runner with a four-speed? Darryl and Linda have one. Theirs came with a Super Track Pak Dana 4.10 and Air Grabber hood, has 13,000 miles, and is Galen Govier certified. And it has its original window sticker and two factory build sheets.

I joked with James Rose, the caretaker of this collection, that I’d love to sneak an old Dodge Dart into this warehouse. “It’s already been done,” he replied, “a cross-ram four-speed Hemi, fully restored.” OK, but I was thinking more like a Slant 6 unrestored model.

There are two Panther Pink autos is this collection, both 1970 Challengers, and both purchased several years ago on Valentine’s Day by Darryl. “He claims to have bought them for me, but I think they were for him,” Linda says with a laugh. My favorite of the pink pair is the R/T 440 Six Pack. Originally from Hawaii, the car’s spoiler, Shaker hood, and chrome rectangular exhaust tips let the crossing guard know this isn’t the librarian’s ride.

We viewed three 340 Six Pack examples, cars that would be the prize of most collections but which here are almost lost in the shuffle. My favorite was the green 1970 AAR ’Cuda, equipped with a four-speed. When you pop the hood and view the oversized orange air filter housing, you might immediately assume this is a Hemi. It’s not. While this block is “only” a 340 with three two-barrel carburetors, there’s still plenty of get-up-and-go.

James Rose let us sit in the cars. I thought we were going to have to pry his brother Ernest out of the black 1969 Plymouth Road Runner with a 440 6BBL and four-speed. This example came with the A15 package and electric windows.

Plum Crazy Mopars stand out in a crowd, even in this warehouse. The second purple model we examined was a 1971 Hemi/four-speed Challenger, my friend Larry Menard’s favorite.

We didn’t cover all 22 dream rides, but you’ve been given a flavor of what’s here. Is it one of the best private Mopar collections in the country? I would think so. And we’ll have to wait to see the red 1968 Hemi Charger, the blue 1969 Hemi Road Runner, and the blue 1971 440-6 ’Cuda, as all were away for restoration.

Darryl and Linda are constantly loaning these vehicles to exhibits and car shows, and they are in high demand. James Rose mentioned an upcoming car auction that he and Darryl would be attending, but wasn’t sure what they were going to bid on. This is a collection that continues to grow.

So, have you decided which Mopar you’d love to have in your driveway? 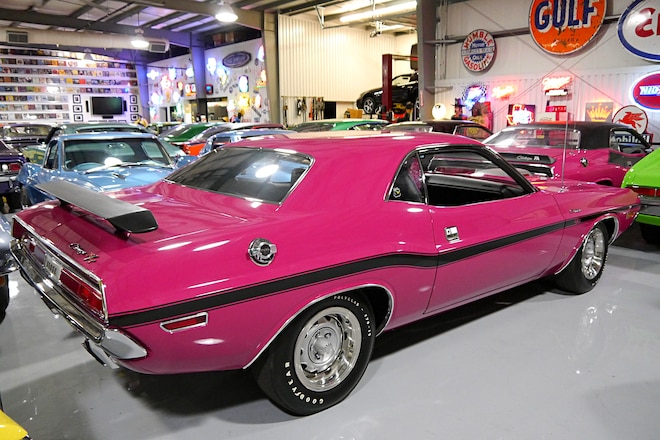 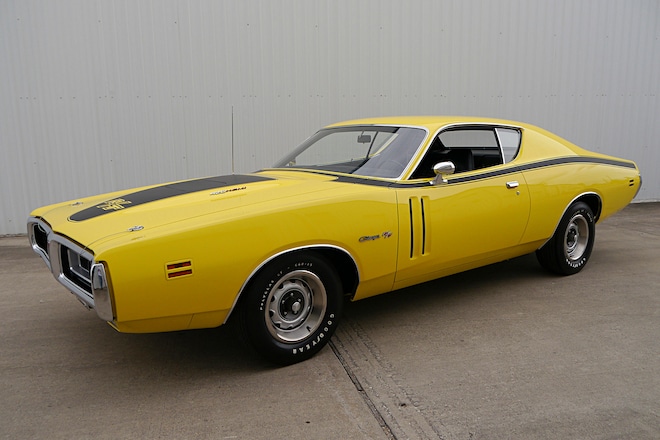 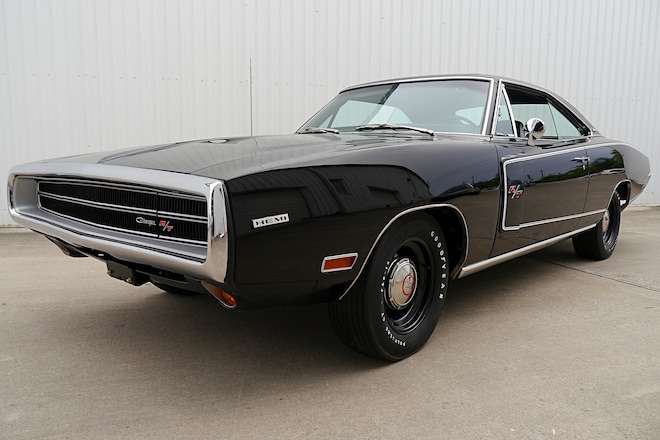 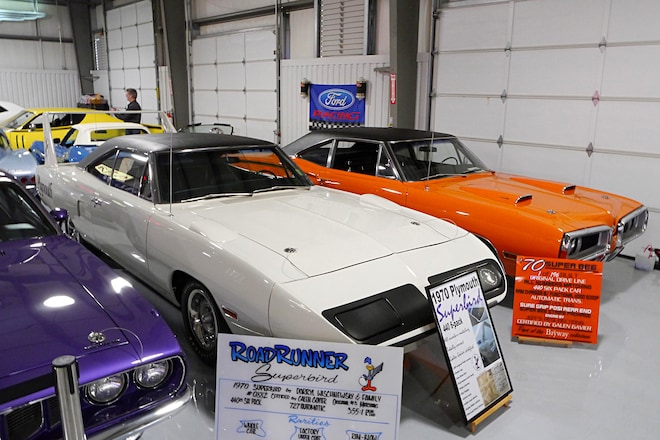 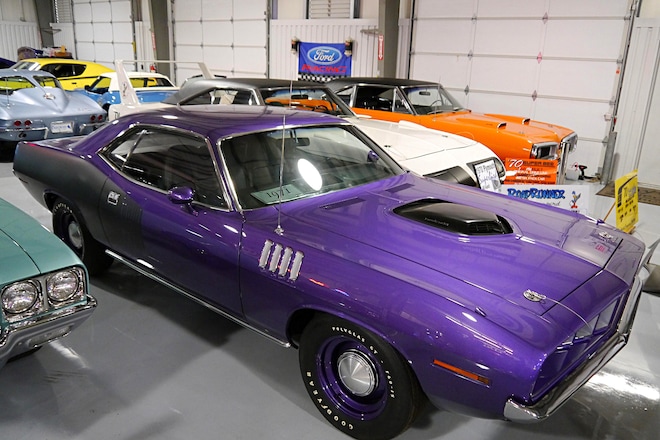 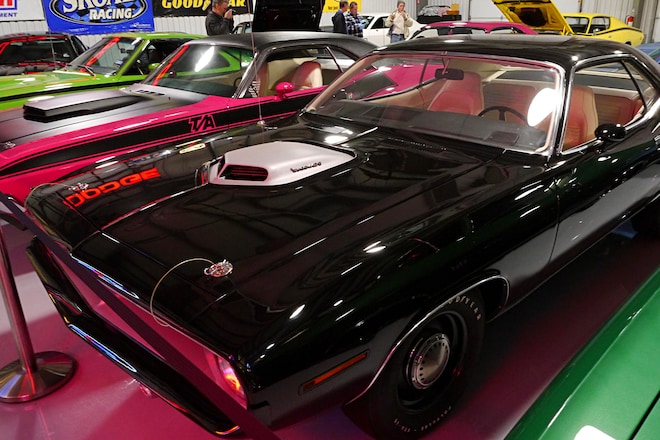 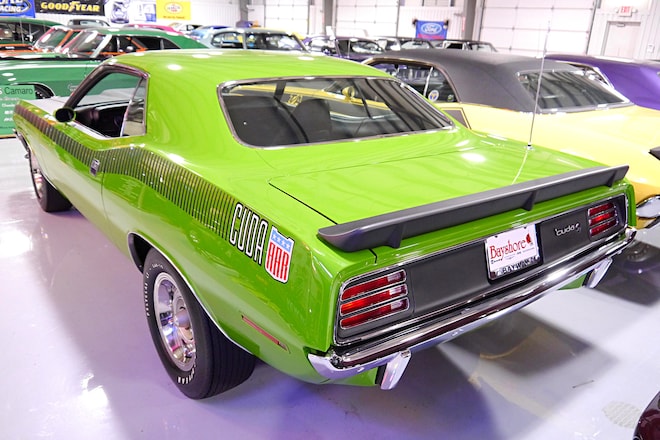 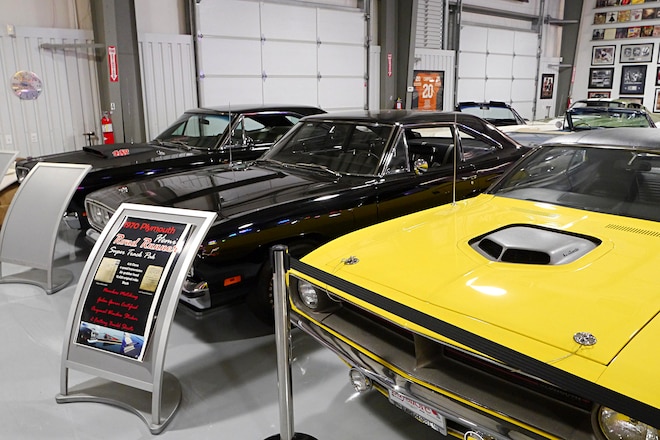 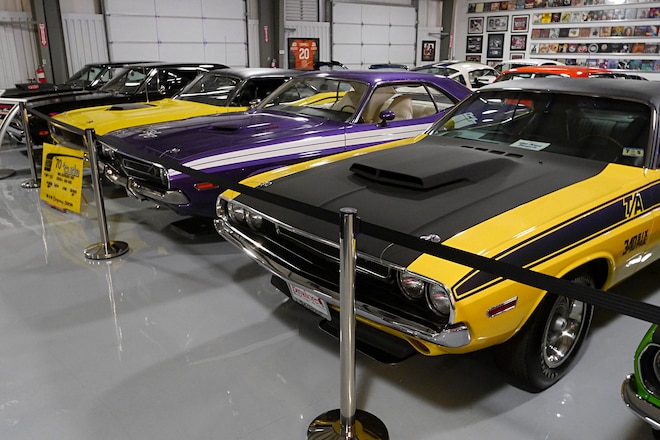 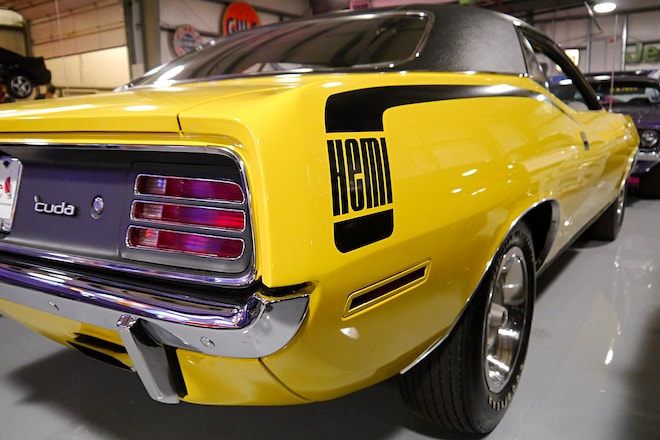 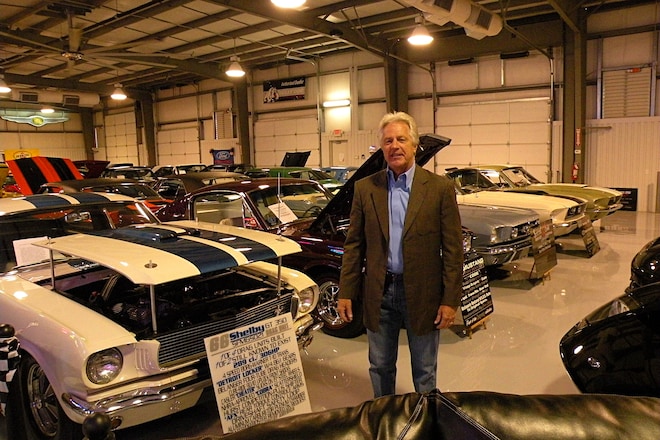