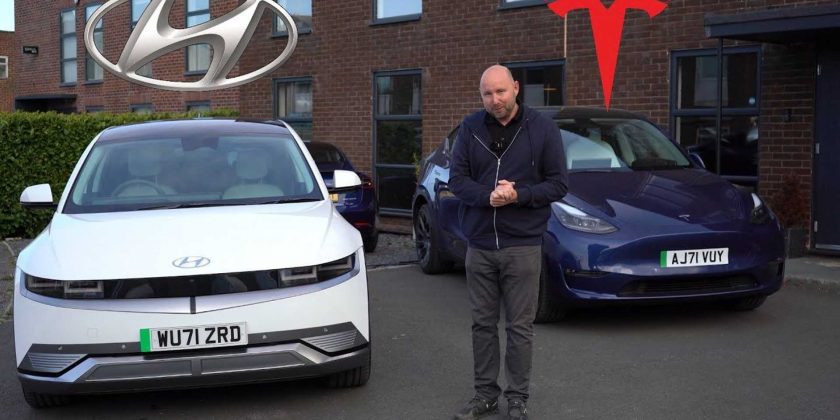 When it comes to EVs, drag races and track battles are a ton of fun. However, what’s much more important is how these electric cars perform in real-world situations. More specifically, we’re talking about range, efficiency, and charging speed. Will the Tesla Model Y or Hyundai Ioniq 5 prove more successful in a side-by-side real-world road trip race?

YouTube channel RSymons RSEV deserves praise for its fun and unique electric vehicle coverage. It often pits various EVs against one another in such battles. While the tests may not be hyper-scientific, they’re undoubtedly educational, and you can definitely apply the results to real-world situations.

In this electric crossover battle, RSymons takes the Tesla Model Y and Hyundai Ioniq 5 on the same roads at the same time traveling at the same speed. The goal is to figure out how these rivals handle the trip based on their real-world range and efficiency, as well as their DC Fast-Charging speed.

The Ioniq 5 is the dual-motor all-wheel-drive Project 45 version with 20-inch wheels. This particular trim isn’t available on our shores. Instead, it was an exclusive range-topping version with a solar roof for UK and Euro markets that’s since been discontinued. RSymons quotes its claimed range at 298 miles, though that’s obviously not an EPA rating. It’s equipped with a 72.6 kWh battery pack with 70 kWh usable.

It doesn’t really make sense to compare pricing here as a conversion, especially since financial markets have changed much of late, and exchange rates, taxes, and vehicle content are different. However, converting the Project 45’s £45,000 to dollars at the current exchange rate works out to about $55,000. When Project 45 first became available, its £48,000 starting price and the conversion based on the exchange rate put it at $67,700.

With all of that said, the channel aims to provide answers to the following questions about the Ioniq 5 and Model Y:

Without further ado, it’s time to dive into the relatively short video to get some answers. However, we encourage you to speculate about the results before watching the video. Then, give it a watch to learn if your assumptions were correct.