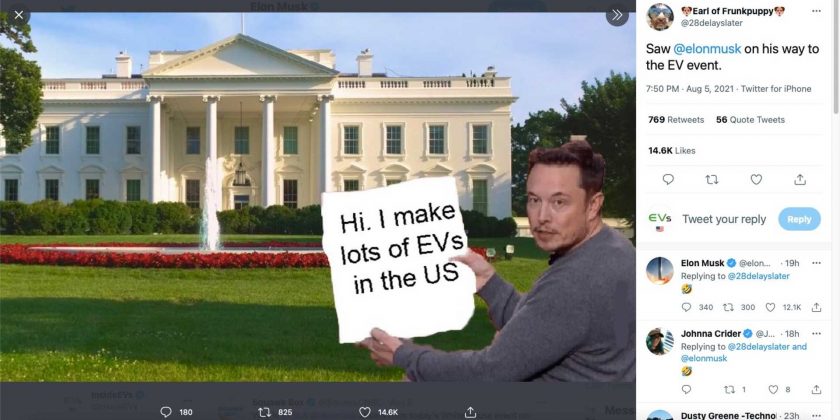 Leaving Tesla out of a conversation about electric vehicles and US automobile production was probably not the best decision.

Many of those who watched president Joe Biden yesterday sign the executive order setting out a target of 50% of all passenger vehicles sold by 2030 to be electrified were surprised that Tesla was not mentioned at all, let alone invited to the White House.

Why exclude the US electric vehicle pioneer and market leader when top-level representatives of the Big Three were present? GM CEO Mary Barra, Ford CEO Jim Farley, and Stellantis North America COO Mark Stewart were all at the signing, as was UAW president Ray Curry. Also, parked on the White House lawn were the Chevrolet Bolt EUV, GMC Hummer EV, Ford F-150 Lightning, and Jeep Wrangler 4xe. No Tesla, though.

So, what gives? Well, for one, Tesla obviously does not need to pledge to increase its electric vehicle sales to 50% by 2030—it’s already at 100% in 2021. In light of the above, inviting Tesla to the signing would have probably been a bit awkward for Detroit’s Big Three.

But completely ignoring Tesla, the company behind the “most American-made” car of 2021 (the Model 3) was probably not the best decision. Elon Musk was also surprised to be left out of a conversation about electric vehicles and US manufacturing, as Tesla excels at both.

“Yeah, seems odd that Tesla wasn’t invited,” he tweeted. Some people speculated online that Tesla was not invited because its production is not unionized, and White House press secretary Jen Psaki hinted at that possibility.

“I’ll let you draw your own conclusion,” Psaki replied when asked during the press briefing whether Tesla was being excluded from the event because its employees were not part of an automotive union.

If that was the real reason, it looks like not all members of the government were briefed about that. CNBC’s Squawk Box show asked Secretary of Transportation Pete Buttigieg about Tesla’s absence from the event and his answer was evasive, to say the least.

“I’m not sure, but what I know is that you are seeing so many leaders in industry. You’ve got newer companies and you’ve got the legacy companies that are both saying that we gotta move in this direction.”

Elon Musk humorously replied to Squawk Box’s post of Buttigieg’s answer with a meme reading “I’m not saying it is sabotage. But it’s sabotage.” As you can imagine, it wasn’t the only meme that has been doing the rounds online.