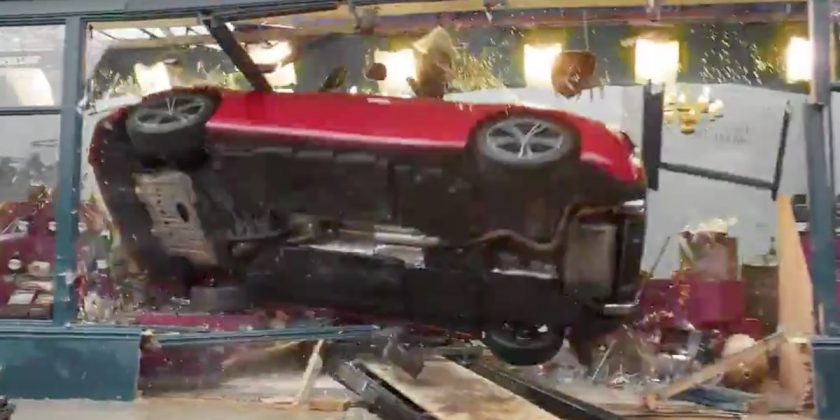 It seems weird to be talking about a trailer for a film which was supposed to come out last May, but thanks to pandemic-related delays, Fast & Furious 9 won’t be out until May this year.

That means Super Bowl LVI presented a good opportunity to give F9 a further plug, which was done via a 30-second spot featuring some footage we haven’t seen before. One shot that stands out involves a Toyota GT86 being hurled through a fancy whisky shop for… reasons. Given the unnatural way in which the recently discontinued 86 flips onto its side and the odd movement of the lorry it smashes into on the other of the shop, you’d be forgiven for thinking it’s all CGI. But no – the main part of the scene was shot practically.

Hours after the trailer went out, director Justin Lin tweeted a short behind-the-scenes video showing that the production team did indeed shove a GT86 through a building IRL. In the clip, the sports car is mounted on a rig which flips the vehicle on to its side, before the whole shebang makes its way through the shop on rails.

Lin said the four-second shot took eight months of preparation and four days on set to shoot. Over 100 people were involved, and three cars were destroyed.

There would have been quite a lot in the way of post-production work too – the GT86 is stationary at the beginning of the practical part of the shot, so we’re surely seeing some CG in the moments before the flip. The buildings on either side were added after the fact, along with some extra debris and that two-wheeled moment for the lorry.

It’s the kind of breathtakingly silly sequence the franchise has become known for in the last few instalments, and it’ll surely be one of many fantastically-over-the-top elements in F9.

Assuming there aren’t any further delays, the film will be released on 28 May 2021 in the UK and the US, opening in some territories on the 26th and 27th.