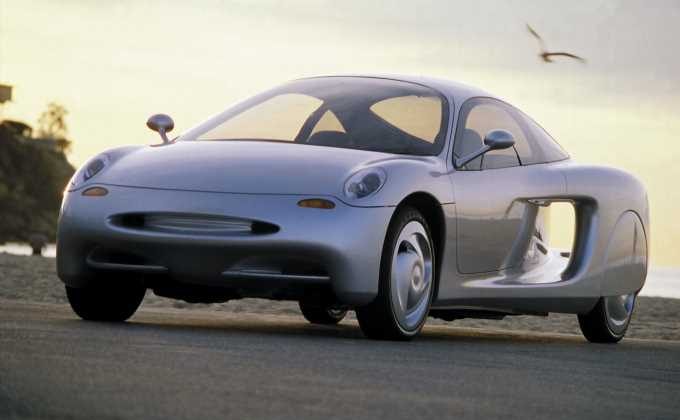 Chrysler originally offered its Dodge and Plymouth Neon models in both coupe and sedan forms. However, it seems the American automaker at least explored the idea of expanding the Neon’s chassis beyond those two body styles, as evidenced by the Neon-based Chrysler Aviat concept. Revealed at the 1994 North American International Auto Show, the Aviat evolved the friendly face of the Neon to better fit the concept car’s more aerodynamic shape.

Despite its mid-engine-like styling, the Aviat retained its Dodge and Plymouth kins’ front-engine and front-wheel-drive architecture. Those cavities, located aft of the Aviat’s two doors, aided airflow around the concept coupe’s body, as did the skirts covering the rear wheels. That said, Chrysler’s decision to fit the cooling system within the Aviat’s rear end surely contributed to the concept’s low-slung looks and mid-engine proportions.

Although its sleek shape and Subaru SVX-like windows blessed the Aviat with the style of a proper sports car, the concept’s 145-hp 2.0-liter I-4 engine reflected the vehicle’s entry-level roots. Still, we bet the little four-cylinder engine moved the extremely aerodynamic and lightweight Aviat with reasonable gusto—all the while sipping fuel at a leisurely rate.

In other words, think of the Aviat as a precursor to other efficiency-focused jellybean-shaped vehicles, such as the Honda Insight and Volkswagen XL1. Unlike those models, though, the Aviat failed to leave the concept stage.