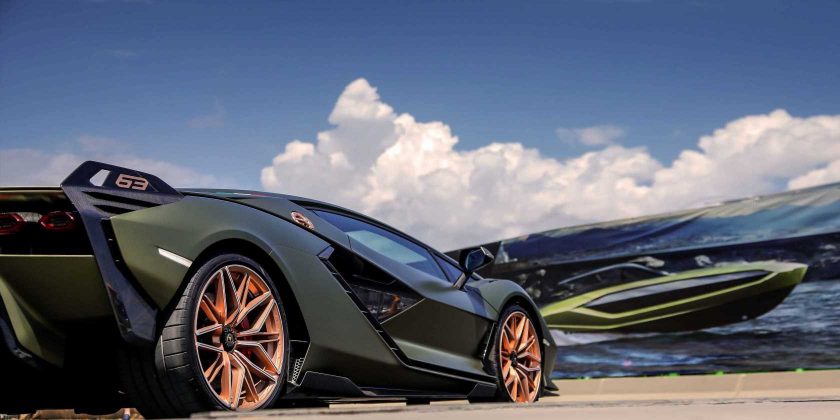 From the Miura to the latest Aventador, and everything in between, driving a Lamborghini makes a statement. The wildly designed, eye-catching cars are not only fun to drive, but are fun to be seen driving in. Unfortunately, Lamborghini cars have a major weakness: They can’t be driven on water. Of course, outside of a few interesting examples, that’s a fairly common problem to have with cars. Fortunately, Lamborghini and Italian yacht maker Tecnomar partnered up to deliver a solution to the age-old problem of land-locked Lambos: the Tecnomar for Lamborghini 63.

This might not be the first time an automaker has partnered with a high-performance boat manufacturer, but it is one of the most intriguing. This Tecnomar boat is far from subtle with its Lamborghini nods. From the design of the boat’s windows and interior to the verde gea paint, which its shares with the Lamborghini Sian FKP37, this nautical Lamborghini is easily identifiable.

Even the powerplants are perfect for a Lamborghini. Moving this super boat through the water is a pair of MAN V12-2000HP engines. As the name would suggest, these 12-cylinder engines output 2000 ps, or 1972 hp, each, which should help get this boat up to cruising speed in a hurry.

Even the boat’s controls resemble those of your road-going Lamborghini. The boat features a digital screen that feeds the captain all the boat’s essential information in what looks like a super-sized Lamborghini gauge cluster. The Lamborghini ignition switch is also in place, as well as a somewhat normal-looking Lamborghini steering wheel. The captain’s chairs also look like they were ripped right off of the production line.

As for the price: expensive. This Tecnomar for Lamborghini is as pricey as it sounds and will run you north of $3 million. There’s another catch: only 63 of these super boats will see production, which might make them a little less than common at your local marina. That said, if you want a yacht to match your favorite Lambo, you should probably let Lamborghini know.

What yacht maker and automaker collaboration would you like to see next? Let us know in the comments below.