Regardless of what age you are, there’s nothing finer than the experience you get when visiting your local dragstrip. The symphony of sounds mixed with the scent of race fuel and burnt rubber creates an atmosphere laced with enough adrenalin to make your pulse race. Now imagine growing up 5 miles away from your local track where every weekend you can hear the roar of supercharged and injected mills lunging full throttle from the line to race the quarter-mile for total domination. For Clay Stevens of Cordova, Maryland, the dream was as real as listening to it all right from his front porch growing up.

It didn’t take long to fall under the spell of hot rodding and by the time he was 16, Clay was already hanging out at neighborhood friend Donnie Gertz’s home garage watching him spin wrenches on a number of wicked muscle cars. It was Gertz’s personal 1969 Nova that lured Clay into drag racing since he was able to watch the car compete at Capitol Raceway in nearby Crofton every Saturday night. By the time he was 16 years old he had built a hopped-up 1966 Chevelle and was running mid 11-second quarter-mile times in a car that doubled as his daily driver.  At the same time he was also bit by traditional hot rods, hanging out with cousin-in-law Ray Bartlett. Cruising to rodding events all over the country together, he would gain a special appreciation for early hot rods running hot V-8s and quick-change rearends. 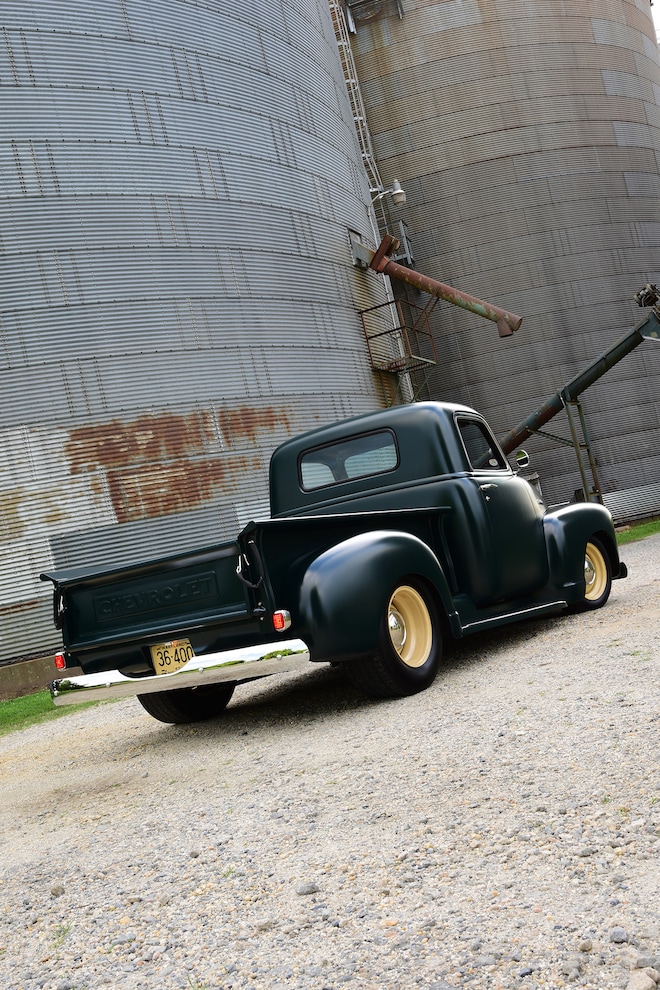 As the years passed he continued to field a number of Chevelles at the track while also starting a family with his lovely wife, Donna, and introducing his two daughters to race in Jr Dragsters. Somehow though, over 30 years of attending rod runs with Ray led him to make a decision to take on his next build with a twist. Being a truck driving professional he had covered well over 3 million miles on the open road.  He thought it might be cool to take on the build of a dual-purpose hauler, which could be competitive at the dragstrip while also being able to take on the long haul to numerous rod runs. With Ray being co-owner of the East Coast Hot Rod Garage (ECHRG) in Denton, it seemed like a perfect plan, especially since Ray had a nice, solid 1949 Chevy pickup resting in the back of the shop. The pair discussed the right combination for the truck melding long-term dependability along with a competitive V-8 and a killer stance to create the perfect balance. A deal was made and the build started without missing a beat.

For a rock-solid base the original frame was blasted clean and boxed for added strength while also being treated to custom crossmembers. To accommodate increased rear tire width the rear ’rails were also moved inboard 3 inches per side. A Ford 9-inch rear was packed with 31-spline axles spinning 4.10 gears. It was suspended in place by a combination of Chassis Engineering leaf springs, gas tube shocks, and antiroll bar deftly matched to Calvert Racing CalTracs traction bars to plant the power. Up front a Speedway Motors Mustang II IFS was added, complete with their exclusive tubular control arms, 2-inch dropped spindles, coil springs, and gas tube shocks, along with a Chassis Engineering antiroll bar and power rack-and-pinion steering. When it’s time to drag anchor a Corvette dual master pushes fluid though steel lines to 11-inch Ford rear drums and 11-inch GM vented disc brakes in front. Linking it all to the street are a set of classic 16-inch Wheel Vintiques Series 14 steelies capped with rubber from Mirada and BFGoodrich. 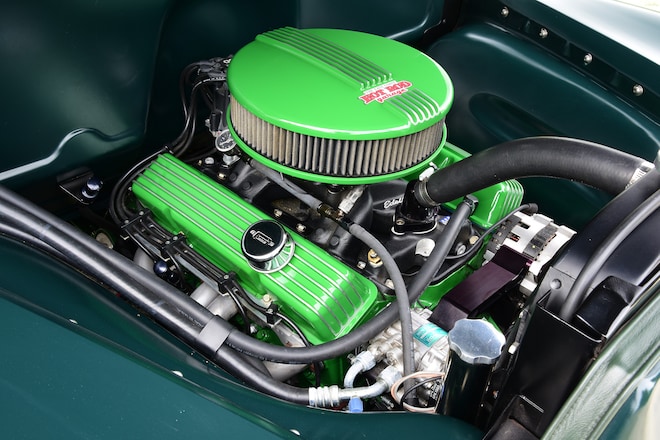 If you’re going to run on the dragstrip as well as put down miles for the long haul, you’d better do your homework when building a stout V-8. For the task Clay contacted Performance Unlimited of Freehold, New Jersey, to assemble a potent 383ci Chevy small-block. With the base massaged to perfection it was packed with an Eagle cast steel crank linked to matching H-beam rods capped with Keith Black forged aluminum pistons getting a bump from a Comp Cams hydraulic roller stick. For plenty of seamless power a pair of Edelbrock Performer RPM aluminum heads and matching intake are fed by a Holley Ultra XP 750-cfm carb. An MSD ignition lights the fire while Sanderson headers dump gases through a custom 2 1/2-inch steel exhaust with Flowmaster Series 40 mufflers by Dale Rhodes. Cool bits include a Vintage Air Frontrunner system as well as finned aluminum valve covers and air cleaner. A Chevy 700-R4 trans by Monster Transmission moves the goods to a custom shaft from A1 Driveshaft. It’s all good for 505 hp at 5,600 rpm on the dyno.

There’s nothing like working with nice original sheetmetal, especially when it’s mint after being blasted clean. The team at ECHRG massaged the cab back to perfection, making every panel razor sharp and setting the gaps while also smoothing out the firewall and adding a fresh bed from Mar-K. Team member Jason Lester then loaded his spray gun with a very subtle satin shade of Rock Moss Green from TCP Global Hot Rod Flatz and laid down the vibe, bringing it all to life accented by a warm ivory for the wheels. Inside it’s all class, starting with a stock dash that was restored and filled with dials from New Vintage USA to monitor the vitals. A 1955 Chevy steering wheel mounted to a Flaming River tilt column carves a course while a column shift selects gears with cool breezes from Vintage Air and tunes flowing thanks to Custom Autosound and Sony. For plenty of comfort on the long hauls ECHRG co-owner Dean Alexander modified a 1988 Chevy truck seat and covered it with plenty of tan leather while also fashioning custom door and kick panels as well as headliner. Since completion, Clay has put down thousands of trouble-free miles as well as running at Cecil County Dragway on the quarter-mile on slicks in the low 12s at 114 mph, and to us that just too cool! 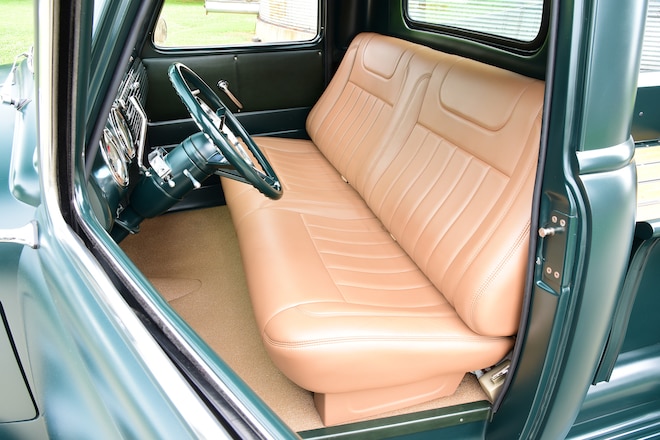 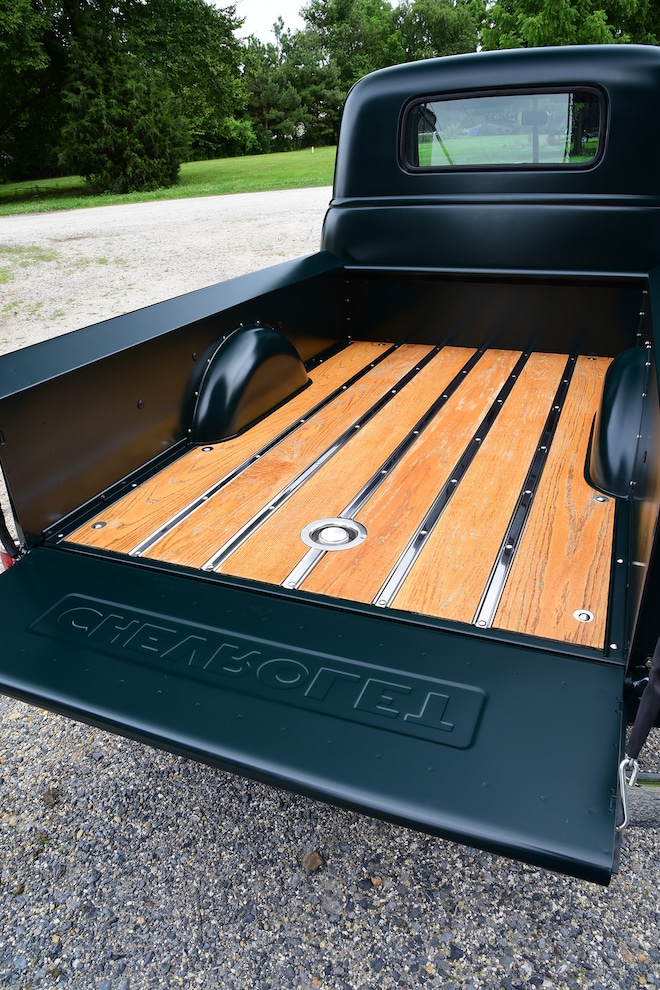