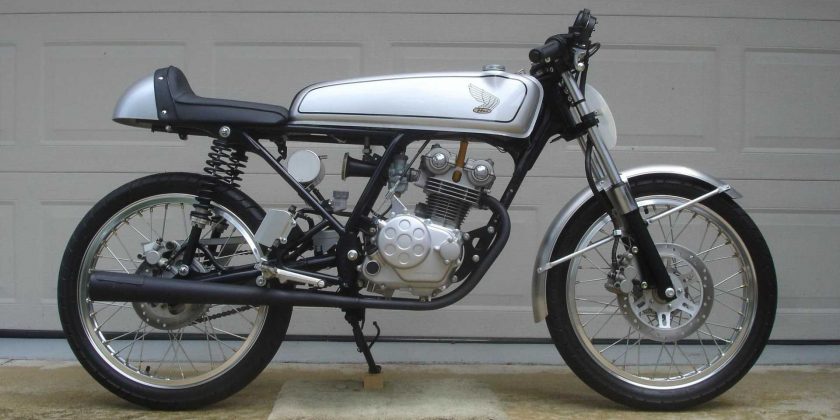 When it comes to proud historic moments, never let it be said that Honda sleeps on celebrating its accomplishments. From this RC162-inspired wristwatch collaboration with Casio to dreaming up an entire tribute bike to pay homage to an historic racing model decades after the fact, Honda loves to celebrate where it’s come from. I mean, wouldn’t you? Under Soichiro’s strong guidance, the company rose in both sporting and customer esteem that is still with us today.

In 2004, Team Red released an extremely limited-edition tribute to its first-ever 50cc GP race bike, the 1962 RC110. This tribute was the 2004 Honda CB50R, also called the Dream 50R. Although Honda is nicknamed “Team Red” with good reason, its earliest race bikes all made great use of silver in their liveries—and this minimalist, extremely sleek silver design shines like an arrow fletched by Soichiro himself.

Only 440 were made, and sold as explicitly non-street-legal, competition-only machines. Most of them went directly to collectors, who then set them out on proud display and never put any miles on them. This particular example features unknown mileage, and you won’t find a running video for it on its auction listing. Then again, unlike many bikes, you may not find many running videos of most of these since they were largely kept as display pieces.

Since the seller says they acquired this particular bike 15 years ago, allegedly from its second owner, it’s totally unclear whether it was ever ridden at all. When it left the Honda factory, the Honda Racing Corporation-built 49cc four-stroke single made a claimed 7 horsepower, but you’d have to rev it up to around 14,000 rpm to hit peak power. It features a six-speed gearbox, preload-adjustable Showa suspension, and disc brakes all around. It rolls on 18-inch wheels wrapped in Bridgestone Battlax BT-39SS tires, which bear a stamp saying that they are not intended for highway use. You won’t find either an electric or a kick starter on this—only the finest, retro-racing-est bump-starting was an option for this model, friends.

It comes with repeated warnings, both on the bike and throughout its literature, advising that Honda did not sell it and does not intend it for street use, as it does not conform to any U.S. EPA regulations. You’ll find decals to this effect on both the tank and the exhaust, as well as notes on the included American Honda Motor Company certificate of origin, as well as the owner’s manual. Never let it be said that Honda didn’t try to warn you.

This particular bike has some discoloration on the fuel filler cap, and also comes with a custom fabricated tachometer bracket made of aluminum and mounted between the clip-ons. The stock tach bracket will also be provided to the winner of this no-reserve auction. As of June 28, 2021, the current bid is up to $5,000, and the auction ends on July 3, 2021. It’s located in Flagler Beach, Florida, and comes with a Florida bill of sale.