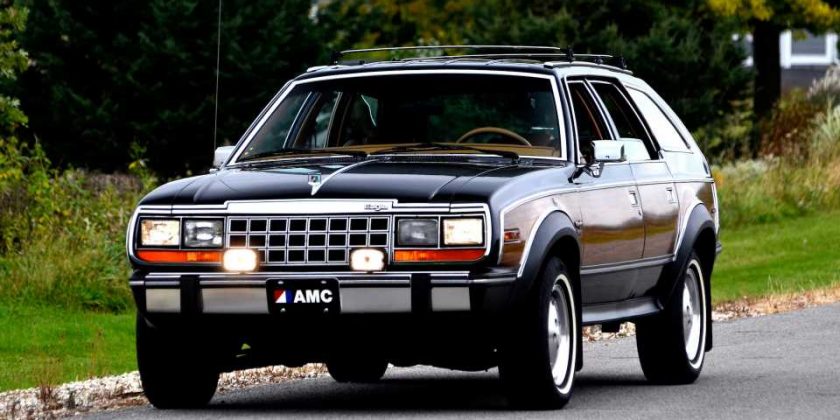 Good things can happen in a time of crisis. In the late 1970s, s second energy crisis had hit, the disco era was approaching the end, Ronald Reagan would soon assume office—and American Motors Corporation, an underdog in U.S. car manufacturing, was on the verge of filing bankruptcy. It faced an uncertain future and needed to bring something fresh and different to the market in a desperate bid to save itself.

The Wisconsin-based company hatched out plans to produce a passenger vehicle equipped with a four-wheel-drive system. At the time, this was a relatively revolutionary concept, explored previously by only a handful of vehicles, like the Subaru Leone 4×4 and Jensen FF. Under the direction of chief design engineer Roy Lunn, AMC hired the British company Ferguson Formula Developments (FFD, which had developed Jensen’s system) to build the prototype. The small-town carmaker introduced the AMC Eagle in 1980, a rugged and well-appointed station wagon based on the AMC Concord.

The AMC Eagle, essentially a Concord wagon with permanent four-wheel-drive (4WD), had a nearly 50/50 front/rear torque split distribution and boasted higher ground clearance. Through a select drive switch next to the steering column, drivers could toggle between two-wheel-drive (RWD) and 4WD modes, but only when the vehicle was stationary. During use on dry pavement, a viscous coupling unit protected the driveline components from wear and tear.

Consumers flocked to the AMC Eagle because of its off-road capabilities coupled with everyday practicality. Rain, shine, snow, mud, and whatever else nature had in the works, the wholesome wagon could handle it all. The AMC Eagle single-handily served as a lifeline to the struggling automaker, which also owned Jeep. Chrysler acquired AMC-Jeep in 1987 and would later discontinue the unprofitable Eagle line in 1999.

A snippet of an AMC Eagle car commercial reads: “With the flick of a switch, American Eagle lets you shift on the fly from two-wheel drive to the sure-footed traction of four-wheel drive because sometimes security is the most important thing your car can give you.” And here’s a fun fact for you: The first mass-produced 4WD vehicle featuring an independent front suspension in the U.S. was the AMC Eagle.

Overlooked and often forgotten, the adventurous family hauler (and the rally exploits of the Audi Quattro) helped pave the way for all-weather family cars like the Subaru Outback, but also foreshadowed the entire crossover segment.