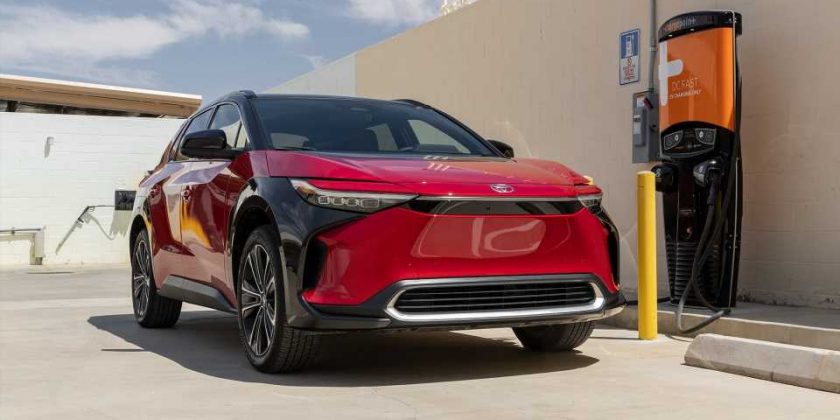 As the 2023 Toyota bZ4X EV crossover begins to land on our shores, Toyota has joined GM and Tesla in that its vehicles are no longer eligible for the Federal Electric Vehicle Tax Credit. This means that Toyota, on the eve of launching its first mass-market all-electric car, must begin to phase out of the credit at three intervals until it can no longer offer it at all by 2023.

With the Japanese automaker pivoting towards more EVs in its product future—including its immediate future with the bZ4X—will the automaker join GM and begin lowering its EV and PHEV prices?

The How and Why of the Federal EV Tax Credit

You might be wondering how Toyota, a brand with no widely available fully electric car in its lineup before the bZ4X (we’re not counting the handful of California-special RAV4 EVs intermittently offered in the past), has run out of EV tax credits. Good question.

Thing is, Toyota has been selling plenty of electrified vehicles—according to the CNBC article that talks about Toyota’s phase-out of the federal EV tax credit, the automaker sold 200,000 electrified vehicles in the second quarter of 2022. That’s the milestone in which an automaker must begin this phase out. Also, the credit applies to plug-in electric hybrids (PHEVs) just as it does to fully electric vehicles, a vehicle type Toyota has offered for years.

To qualify, the electrified vehicle must have a 5-kWh battery capacity, must use an external source for charging (you have to plug it in), and not have a gross vehicle weight (GVW) of 14,000 lbs while still meeting specified emissions standards for federal or state (usually the California SMOG emissions model). Thanks to its ever popular hybrid lineup that offers PHEVs that qualify (along with the 2012-2014 RAV4 EV), Toyota’s running out of EV tax credits.

The Phase Out Begins, Soon

The beginning of the phase-out starts on October 1, 2022 and customers who purchase a qualifying electrically-powered vehicle on or before September 30, 2022 will be eligible for the full incentive of up to $7,500. Purchase after that date, and the credit drops by 50 percent, making the highest incentive a customer could get a mere $3,750. On April 1, 2023, the credit will drop again to 25 percent of the original full credit (up to $1,875) before being completely phased out in October 2023. Basically, if you want to take advantage of any tax credit on an electric vehicle from Toyota, you have a year to do it but if you want the full potential credit, you have until September 30 to buy an EV or PHEV that qualifies.

Also, keep in mind that $7,500 is the maximum tax credit but not all vehicles qualify for that full federal credit. Currently, the only PHEVs that qualify for that maximum amount are the Toyota Rav4 Prime PHEV and the Lexus NX-series PHEVs. The Toyota Prius Prime PHEV only qualifies for $4,502, which will then drop to $2,251 after September 30 and $1,125.50 after April 1, 2023 to October 2023. The 2023 bZ4X isn’t listed on the Federal Tax Credit page of FuelEconomy.gov, but based on the qualifications for the credit, the bZ4X would get the full $7,500 before the phase out begins.

The Toyota spokesperson we reached out to by email didn’t specify if or when prices would be adjusted or if the brand expects an extension to the federal EV tax credits. Bob Carter, outgoing executive vice president of sales at Toyota and Lexus, gave us some insight during an interview last month, stating “What we’re after is equity. We’ll get through the 200,000 credits and there’s no expectation that that will get expanded. We’re big boys and we’ll have to give a little bit of pricing and maybe a little bit of incentives but we can manage our way through that.”

Currently, the only plan by the Biden administration is to provide federal EV tax credits to manufacturers with a unionized labor force. Toyota, currently, does not use union labor at its manufacturing plants here in the U.S.; neither does Tesla. That plan hasn’t even been approved yet and until the administration changes tactics and allows for all EV and PHEV manufacturers to qualify for those credits, there won’t be any further tax incentives for electrified vehicles made by automakers who’ve run out of the credits.

The only remaining way to incentivize customers in the meantime is by reducing prices and offering rebates, just as GM has. Toyota’s spokesperson did say this about expanding the federal EV tax credit in general, “Consistent with our drive to reduce carbon, Toyota supports tax incentives to make electric vehicles more affordable. Providing incentives to customers of companies that have led the way on electrification will help accelerate America’s transition to an electric future.”