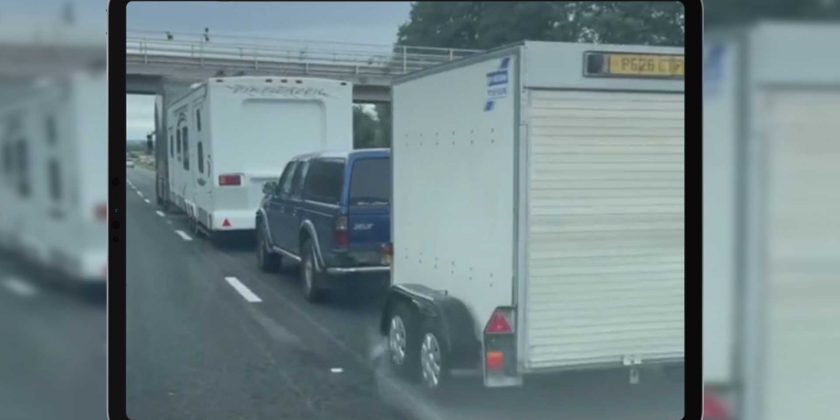 Before we launch into the curious video embedded below, let’s review some towing terminology. If you’re a professional truck driver, you might refer to pulling two trailers as doubles. In the RV world, that’s usually called triple towing, as it involves three units total. What we have here, however, is quadruple towing – a primary tow vehicle with three units hooked up. And from what we see in the video, the driver isn’t exactly going slow.

The clip comes from the TikTok account of brettbarloww. Based on the type of tow vehicle, the style of the number plates, and a mention of M1 in the video description, we’re assuming this road train was spotted on the M1 motorway somewhere in the UK. That assumption is shared by TireMeetsRoad, which has its own report on this quadruple tow as well as some insight into whether it’s even legal.

Aside from this looking very sketchy – there’s a slight whip action in the convoy that’s rather unnerving – we suspect the question of legality is the primary response from folks watching this clip. It’s certainly a hot topic in the comments on the video, but TireMeetsRoad mentions a section of UK law called Showman’s vehicles that sets no limit on the number of trailers being towed. As long as the trailers aren’t cargo haulers and have some measure of living accommodation inside (as in a camper trailer), then the number doesn’t matter.

What does matter, however, is the length. According to UK regulations, Showman’s vehicles cannot exceed 22 meters (72 feet) in total length. That includes the tow vehicle, and if this particular setup isn’t over that mark, it’s damn close. That Pinecreek triple-axle travel trailer is likely 35 feet long by itself, and beyond that, such towing is restricted to 40 mph on motorways. We obviously have no idea how fast this quadruple rig is going, but it is caught on camera hammering down the M1 in the fast lane.

In the United States, triple towing with RVs is legal only in certain states, never mind quadruple towing. Here’s hoping this driver reached their destination safely, but embarking on such a towing adventure isn’t something we’re eager to try anytime soon.