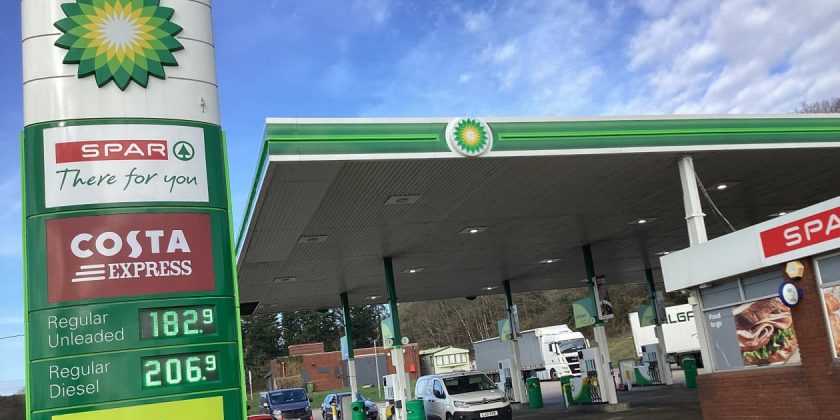 Petrol is now 2.8p per litre lower than its record high, with possibility for average tank to soon be £10 cheaper

Meanwhile, wholesale petrol that had peaked above £1 a litre on 1 June, fell to below 80p a litre for much of last week, indicating as much as a 20p fall from record highs at the pump within a fortnight.

The decrease may continue, according to the AA, due to wholesale costs having fallen from £1 to 80p. This could mean a 20p reduction in petrol prices at the pumps, so long as retailers pass their savings on.

“Wholesale petrol’s trajectory, if sustained, would lead to savings of a tenner off a tank from the record highs – providing the fuel trade is prepared to pass them on,” said AA fuel price spokesman Luke Bosdet. “Even with oil rebounding, wholesale petrol remains below 80.5p a litre.

“The problem is that, in many places, the price cuts are quite simply not happening despite more than six weeks of falling costs.”

The saving may only be temporary, though, with David Wech – chief economist at energy analytics firm Vortexa – having told Auto Express that “the supply of Russian oil hasn’t really been a factor in prices yet”.

Refining capacity limitations and a lack of inventory of refined fuel are key problems as well, Wech says. That, combined with the full impact of the Russia situation, will mean crude oil barrel prices will be anywhere between $100 and $200 in the next 12 months.

Fuel retailers have been investigated after accusations that the 5p-per-litre fuel duty cut was pocketed instead of being passed on to consumers. Business secretary Kwasi Kwarteng wrote to the boss of the Competition and Markets Authority (CMA), asking for an independent review and the review has now reported that the tax cut was indeed reflected in petrol and diesel prices.

The CMA report did raise concerns over the growing gap between the price of crude oil and the wholesale price of petrol and diesel fuel. Oil industry experts have suggested that this is due to limited refining capacity and low refined fuel inventories, identifying these as the main drivers of the fuel price crisis facing the UK.

Why are diesel and petrol so expensive?

Russia is one of the world’s largest producers of oil and gas, so any disruptions to its production processes has a global impact.

With Russia having launched a full-scale invasion of Ukraine and facing international sanctions, there’s potential for significant disruption to supplies. Russia produces 4.5 million barrels of oil each day, and only Saudi Arabia produces more.

The sanctions levied against Russia so far have targeted banks and oligarchs rather than the country’s energy sector, but factors such as Germany’s postponement of the Nord Stream 2 gas pipeline will have an effect on the energy market overall. Russia also has the ability to reduce oil exports to Europe in a tit-for-tat response to economic sanctions, and experts suggest Saudi Arabian oil fields could struggle to increase production sufficiently to counter such measures.

“Opec, the oil producers’ cartel, is already struggling to meet its output targets as demand for crude rebounds following the easing of lockdown restrictions. This has pushed up prices, with analysts warning there is limited capacity to increase supplies if flows from Russia are affected by sanctions,” the Financial Times newspaper has reported.

When will fuel prices go down?

Experts predict high fuel costs will be with us for the foreseeable future, and it’s not just down to the crisis in Ukraine – energy costs have been high for the best part of a year already as demand surged as the world emerged from lockdown.

Part of the problem is down to the fact that relatively low barrel prices in recent years have put plans to drill for new reserves on hold. That’s true in Africa, the US and South America, and while the current high prices may increase interest in exploring new reserves, it can take years for new wells to come on stream in volumes required to affect the market.

Recently, the influx of cheap diesel from countries like Saudi Arabia has turned the tide, swinging diesel wholesale prices closer to that of petrol, and bringing the pump price down with it. However the fact that we get a higher percentage of diesel from Russia than petrol means the advantage has swung the other way again.

What’s your view on fuel prices in the UK? Do we pay too much for our petrol and diesel? What would you do about it? Join the debate in our comments section below…