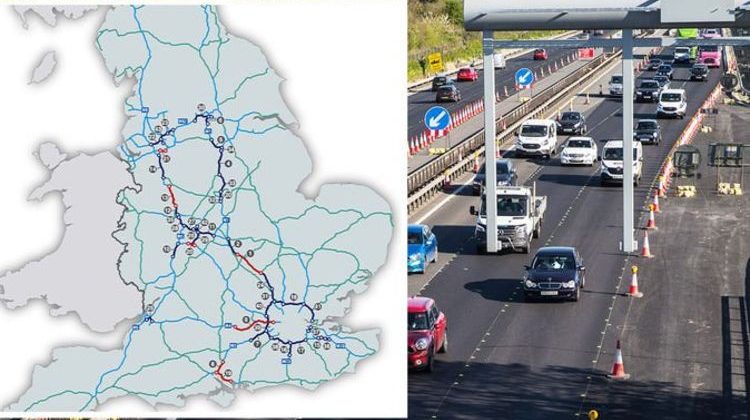 In recent years a number of key highways within the UK have been converted into ‘smart motorways’. These remove the hard shoulder to create an extra lane of traffic and with the aid of modern tech help to ease congestion. However, they have faced criticism for being unsafe and leading to fatalities. So, where can you currently find them?

What are smart motorways?

Smart motorways are motorways which use technology to manage traffic flow.

In addition to informing drivers of speed limits – which are regulated using speed cameras – the overhead signs can also alert people to accidents or other hazards ahead.

There are three main types:

Where can you find them in the UK?

London, the West Midlands and the North West are the three main areas in the UK where smart motorways can be found.

Currently, almost the entire M25 is a smart motorway, as well as long stretches of the M1.

Another 100 miles of all-lane running smart motorway that is currently under construction will be completed, while 57 miles of planned routes are being put on pause.

The following travel routes also have smart motorway sections built within them:

In total, operational smart motorways span a distance of nearly 375 miles, 235 of which do not have a hard shoulder.

Indeed, it’s this element which has generated the most criticism, with Tory MP Chris Loder labelling it a “national disgrace” that the motorways were opened without the right life-saving measures installed.

Other politicians have echoed Mr Loder’s comments, having revealed worrying stories about constituents killed or marooned in live traffic on the roads.

Earlier this month, the Government announced it had opted to delay the construction of new smart motorways for five years, to collect further data over their safety.

Why can smart motorways be dangerous?

Last November a Government review found there was not enough safety and economic data to justify building more all-lane motorways at present.

Instead, five more years of data will now be collected for these types of routes, which will remain open for the time being.

Critics say the lack of a permanent hard shoulder could leave drivers stranded in fast-moving traffic during an emergency.

Government figures show 38 people were killed on smart motorways between 2014 and 2019.