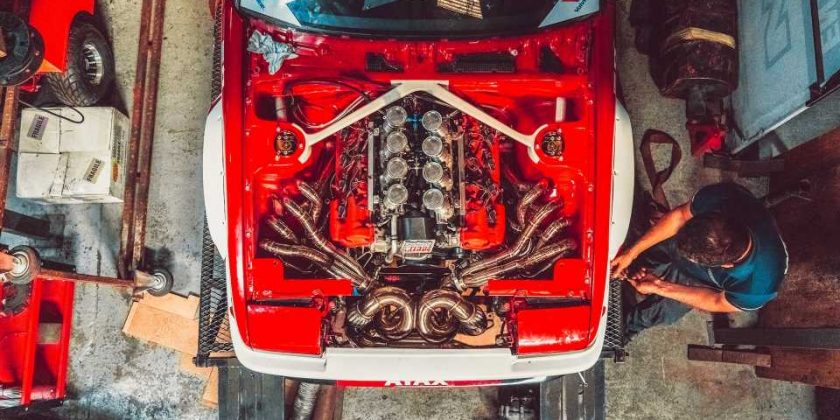 The age of wild, over-the-top engine swaps continues to spawn some fascinating combinations, just like this Ferrari-powered Toyota Corolla. Yes, a Ferrari engine nestled within the engine bay of a Toyota has already taken place before, courtesy of Ryan Tuerk and his GT4586—a Ferrari 4.5-liter F136-swapped FR-S that had everyone talking back in 2017. This time around it’s the original 8-6, the very car that inspired Toyota’s launch of the FR-S (later named the Toyota 86).

Fernando Montero, or Monti, as he’s known, has owned this Trueno for the last 13 years but the car is an anomaly in his home country of Uruguay, where the mid-’80s marvel was never officially offered. Monti notes that to his knowledge, this is the only AE86 that exists in the entire country, and he credits Initial D as his introduction and love for the chassis.

As with most project cars, it began from a very rough state of affairs. Monti tells us that the car was “in horrible condition—totally wasted” and even with that fact working in his favor as a buyer, he still had to save money for seven years to make it his. As a medical student at the time, he saved whatever he could and once he brought the car home, it would be another few years before he could afford to start modifying it. “I started drifting with no power (112 hp), and I trained in the rain. After so many years with the car, I know it very well,” he notes.

That original 4AG would later be replaced by a 3SGE Beams swap, then upgraded again with the help of a supercharger. After that came the crazy idea to give the 8-6 the heart of a Ferrari, a move that Monti refers to as a tribute to Ryan Tuerck’s GT4586.

“Ryan helped me with lots of parts on this swap and in the special design of the headers. I’m teammates with Jhonnattan Castro and at the same time, Jhonnattan is teammates with Ryan through Toyota Racing. I’m a great fan of his and he is a friend of mine.” Though these cross-continental friends haven’t met in person yet, that will eventually change as Gazoo Racing is set to build a drift park in Uruguay and teammates Tuerck, Castro, and Aasbo will all be paying a visit upon its completion.

As you might imagine, Ferrari F430 engines aren’t lining your local pick-n-pull salvage yard and as such, they’re not easy to come by. Monti was fortunate enough to come across a wrecked Scuderia in France and jumped at the chance to buy its power plant. Getting the engine to sit properly between the AE86’s shoulders meant custom mounts by WTR. Though the width of the V-8 long block played nice with the Corolla’s bay, to route the exhaust would require a set of very custom headers.

With crucial input from Ryan Tuerck, a design was put together that sends the header primaries forward and outward, utilizing all of the open space between the headlight and shock tower areas before twisting back toward the front of the engine. There, each header sees yet another twist before meeting its other half in a custom X-pipe and then to a pair of mufflers that send exhaust gases out of either end of the front bumper. Produced by Woom, the exhaust system threatens to steal the entire spotlight from the extreme engine swap with its luscious curves and serves as one of the most eye catching parts of the build.

Not far behind the exhaust system in terms of attention is the series of Dellorto intake stacks that jut upward, well above the fender line, providing immediate throttle response and yet another talking point for the project. In terms of operation, marrying the ancient Corolla’s native harness with that of the Ferrari engine harness is the stuff of nightmares and to make it all operate reliably, a FuelTech FT600 was brought in.

“The most difficult part of this build was the electronics for the engine to work well. Thank God Anderson Dick helped us a lot and now FuelTech is also our sponsor,” Monti states. If you’re not already familiar, Anderson Dick is the founder and owner of FuelTech and has earned a reputation for fielding questions personally, and he and his team are recognized for coming up with expert solutions for a rapidly growing list of end users that rely on his devices to power unorthodox set ups. The FT600 packs everything Monti needs into a single unit and serves as a digital display, datalogger, vehicle ECU, power management, and engine startup and operation ignition device.

Intended for drift sessions, Monti says the car is often used to put on a show at various events that benefit charity, and put on a show it does. Being that Ferrari never intended their V-8 to sit inside of an ’80s Corolla, nor experience extended sideways slides under full throttle, oiling and cooling were of the utmost importance. With the front grill area dedicated to header and exhaust clearance, the radiator was mounted remotely, just under the rear of the car. Custom lines were designed for it and the dry sump oiling system to make sure any fear of starvation was accounted for.

The big engine in a little car scenario requires some additional bracing and safety considerations. To that end, Monti’s “TrueRarri” received an intricate roll cage that overtakes the cabin and spans into both the hatch space and engine bay with appropriate gusseting used throughout. A pair of Bride bucket seats with Takata harnesses keep pilot and passenger in place during drift activities as Monti eyes engine vitals on the digital cluster. A switch-heavy center console cascades down the center of the seude-wrapped makeshift dash, and the original door cards have been replaced by lightweight covers.

Having established over a decade of ownership, four different engine setups, countless drift sessions, and more than 4,000 hours of labor invested over that time, Monti has realized his dream build. With the Gazoo Racing drift park on the horizon and a visit from his U.S. drift friends waiting in the wings, the story of the only 8-6 Corolla in all of Uruguay and it’s supercar heart is just getting started.

Thank You Special thanks to my wife for her tolerance and support on everything and all the team of WTR and Gazoo.