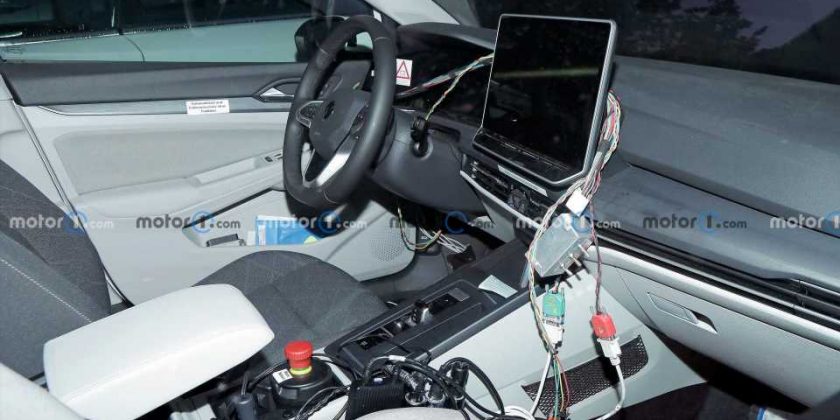 It’s hard to believe the eighth-generation Volkswagen Golf is already three years old. It’s true, and that means a mid-cycle refresh for the enduring hatchback is just around the corner. Technically speaking, the images here represent our first look at what’s to come but there’s nothing to see on the outside. That’s because this is a test mule putting new interior tech through its paces.

Our spy photographers managed to get a close look, and the changes are obvious. Taking center stage in the dash is a significantly larger touchscreen, extending out and up by quite a margin. It’s not a total departure from the current model, as the new touchscreen inhabits the same mounting location. But whereas the current screen has an integrated presence with the dash and the driver’s display, this one is large and in charge. it also appears a new set of buttons will be used on an angled base at the bottom of the screen. At this point, it’s unclear if they are touch-sensitive or analog.

Interestingly, a common criticism of the current Golf is its touchscreen. Specifically, there are no analog controls for operating the radio and climate system, and adjusting them through touch can be tricky. We encountered this firsthand in our GTI first drive review, noting that doing something as simple as adjusting radio volume could be difficult on a rough road. The layout also leaves no place to rest your hand while trying to use the screen. With this test mule having a larger screen with an angled base, VW could be addressing that issue.

What else can we expect from the updated Golf? That’s still a mystery, as this test car doesn’t have any changes to the outside. Volkswagen is exceptionally crafty with stickers that hide changes in plain sight, but after careful examination of these photos, the new touchscreen is the only thing that stands out.

When other prototypes hit the streets, we wouldn’t be surprised to see minor tweaks to the headlights and grille, adopting similar styling to the ID.4. A proper reveal is likely many months away, possibly stretching into late 2023.