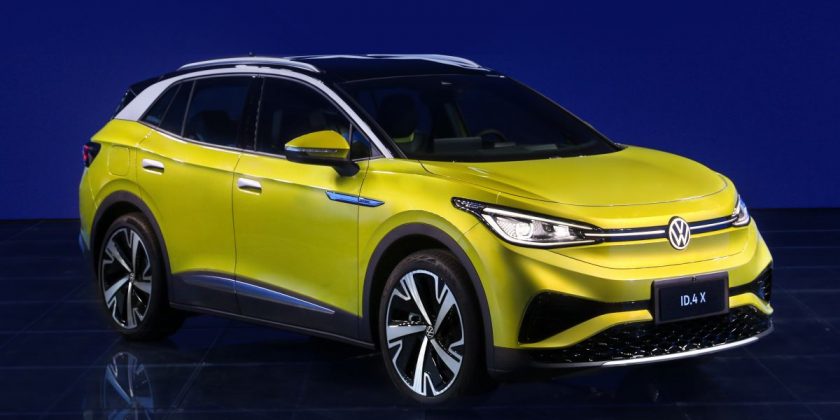 The Volkswagen ID.4 fully electric SUV made its debut in September, joining the ID.3 hatchback in employing the automaker’s MEB platform for its fully electric vehicles. Volkswagen has unveiled two versions of its electric SUV for China called the ID.4 X, which wears slightly different exterior styling compared to the ID.4 for other markets internationally, and the ID.4 Crozz, which is similar to the international model.

The two versions of the ID.4 electric SUV are built exclusively for the China market by separate joint ventures that Volkswagen has in the country. The ID.4 X is built by SAIC-Volkswagen, while the ID.4 Crozz is built by FAW-Volkswagen. The ID.4 X exterior was revealed in a Chinese government filing, alongside that of the international market ID.4.

The ID.4 X measures 20 mm longer and 11 mm taller than the ID.4 Crozz, while width and wheelbase are the same for both versions. The ID.4 X gets headlamps with extended corners, somewhat in the fashion of the units on the eighth-generation Golf, while the front bumper gets larger intakes in the corners compared to those on the ID.4 Crozz.

Here, different wheel designs are shown for each of the two versions as well. At the back, the ID.4 X licence plate is mounted higher, just below the logo, compared to the ID.4/ID.4 Crozz unit that is located below the tailgate.

Inside, the interior of the ID.4 X gets detail differences to mark it out from that of the international-market ID.4. The 12-inch infotainment touchscreen is carried over, while the gloss black trim pieces in the ID.4 are matte-finish items in the ID.4 X. The centre console houses a wireless device charging pad and two USB-C ports ahead of a single cupholder, in place of the dual cupholder setup in the ID.4/ID.4 Crozz.

Seat upholstery in the ID.4 X employs a different fabric pattern as well as colours, though the seats themselves appear to be the same. A panoramic glass roof features in the ID.4 X as in the ID.4, along with the same rear seat split-folding configuration.

Technical details for the China-specific ID.4 duo so far list a cruising range of 400 to 550 km in the NEDC protocol, and the the largest capacity battery can attain an 80% charge in 45 minutes, according to the Volkswagen China website.

For reference, the international market ID.4 starts in base RWD form with a 204 PS rear-axle mounted electric motor and up to 77 kWh in battery capacity for a range of up to 520 km on the WLTP testing cycle.

The international ID.4 range will also be joined by a dual-motor variant, which adds a 102 PS/140 Nm front axle motor to the proceedings for a total system output of 306 PS. Charging the ID.4 is possible at a rate of up to 125 kW at a fast-charging station, where a 30-minute charge will add 320 km to the ID.4’s available range.

The ID.4 X will be made at the German brand’s facility in Foshan, China, while the Anting, China plant that produces the ID.4 Crozz has commenced production, and is slated to output 300,000 units annually. Other production sites for the ID.4 are in Zwickau, Germany, and these will be joined by the Chattanooga, Tennessee facility that will start production in 2022.

Reservations are being taken for the ID.4 X and ID.4 Crozz through the Volkswagen China website. With both designs for the MEB-based electric SUV on display, which do you prefer the look of, dear readers?