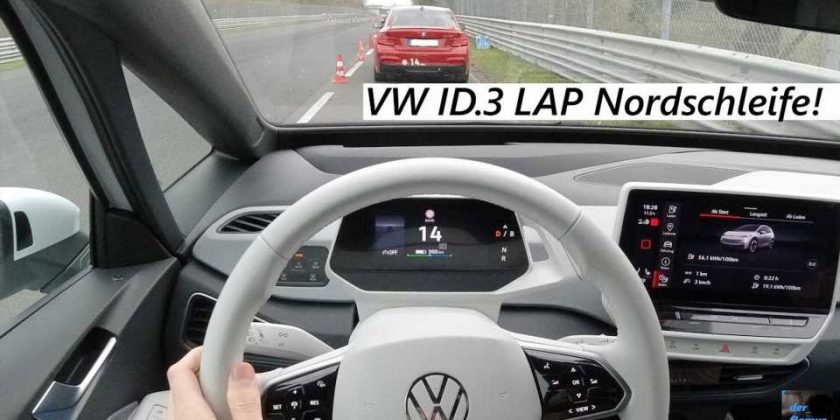 It looks really nice and planted, making us imagine just how much better an ID.3 GTX would be.

Volkswagen is reportedly not yet sure if it wants to make a hot version of its ID.3 Golf-sized electric hatchback (not available in the US). The manufacturer has revealed a spruced up GTX version of the ID.4, but based on what we saw in this ID.3 Nurburgring Nordschleife POV drive, it’s really the ID.3 that deserves more power and more excitement.

It’s already pretty good, even with just over 200 horsepower and an electronically limited top speed of 160 km/h (99 mph). The claimed sprint time to 100 km/h (62 mph) is 7.9 seconds, which is adequate for nipping in and out of traffic, but out on a track, that just isn’t enough. In this video uploaded by der_flamur, the ID.3 appears to stay within range of a BMW M4 around the twisty bits, only to be left behind on the straights.

The plus points we noticed in the video are just how pointy the front axle appears to be – steering input is immediately turned into movement of the vehicle and this is is the mark of a good driver’s car. And let’s not forget the ID.3 is a rear-wheel drive vehicle, which probably helps by allowing the front tires to only have to deal with steering, braking, but not delivering power to the ground.

If VW did make a hotter version of the ID.3, an ID.3 GTX, it would probably be turned into an all-wheel drive vehicle with around 300 horsepower. We really want to see that happen, especially since there are currently no vehicles that we could unequivocally call electric hot hatches. Sure, we have the MINI Cooper SE, but it’s not much quicker than the quickest current VW ID.3, so it’s more of a warm hatch, really.