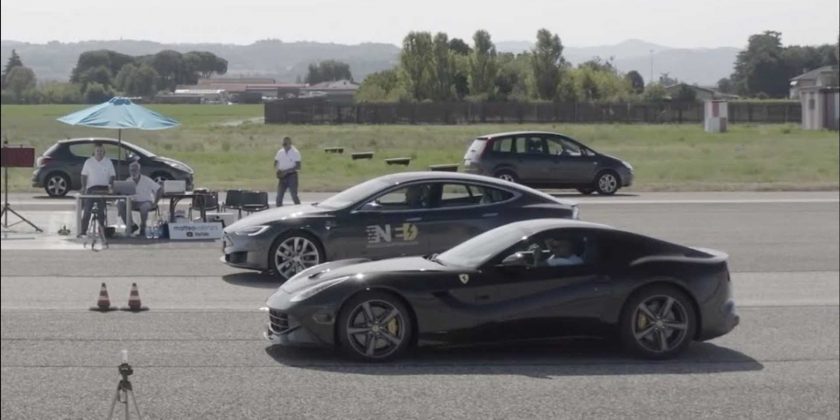 One day, hopefully, all these supercars will be electrified, unless they’re okay with being embarrassed.

In this very brief video clip from ICSI, we see the Tesla Model S P100D race the Ferrari F12. The cars have almost nothing in common aside from excellent acceleration. The $700,000 F12 can hit 60 mph in just under 3 seconds. A new Model S Performance will cost you less than $100,000, and its zero-to-60-mph time comes in at 2.3 seconds.

The Tesla Model S P100D is one of the quickest production cars ever made. The crazy part is that Tesla upgrades its range and performance on a regular basis. Yes, this car gets better while you own it, via over-the-air software updates. The current version – the Tesla Model S Performance – is a better overall performance than the P100D, which was already tough to top.

Meanwhile, popular gas-powered sports cars like the Chevrolet Corvette, Porsche 911, and this Ferrari F12 are also improving over time. However, improvements aren’t continuous. Instead, in order for an automaker to make one of these cars even better, they have to redesign it, offer a new model, etc.

Yes, there was a time that electric cars were compared to golf carts, and the description was almost fitting in some cases. This led to some car lovers discrediting EVs, and some of them still think electric cars are subpar. However, almost every EV today offers pretty solid performance, especially when it comes to the dynamics drivers need (and enjoy) for daily driving.

At any rate, take a few seconds to watch what happens when a Ferrari challenges a Tesla. Due to the Tesla’s instant torque, it appears the F12 driver isn’t even trying.