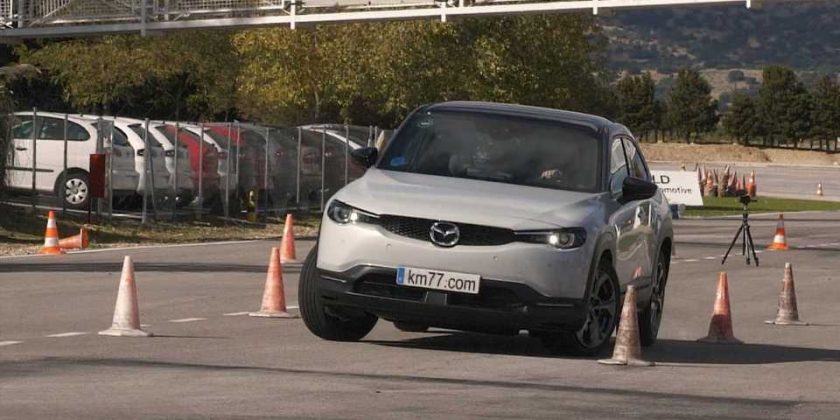 It’s safe and stable, but it does not excel at it.

Those who have driven the Mazda MX-30 say it feels agile and light on its feet, for an electric crossover, but how does that perceived handling quality translate into its performance in the moose test? Well, pretty good actually, although it doesn’t excel when it comes to the speed it achieves.

The best attempt recorded in the moose test by Km77 is at 74 km/h; at 75 km/h, the car just clips a cone, but remains stable and in controlled. In most attempts, the MX-30 exhibits strong initial understeer, but it is quickly reigned in by the car’s electronics – it never looks out of control, like some other crossovers.

From the outside, the maneuver doesn’t look that dramatic, even though this is a crossover and its center of gravity is higher than that of a regular car. Even so, it doesn’t lean excessively and it remains relatively surefooted during all the attempts.

And the same can be said about the slalom test that is also performed in the video. Here, what body roll there is becomes more apparent, but the vehicle’s performance is rated as satisfactory overall. The vehicle tested was running on 18-inch wheels shod in Bridgestone Turanza summer tires that offer a blend between grip and efficiency; they are not performance tires.