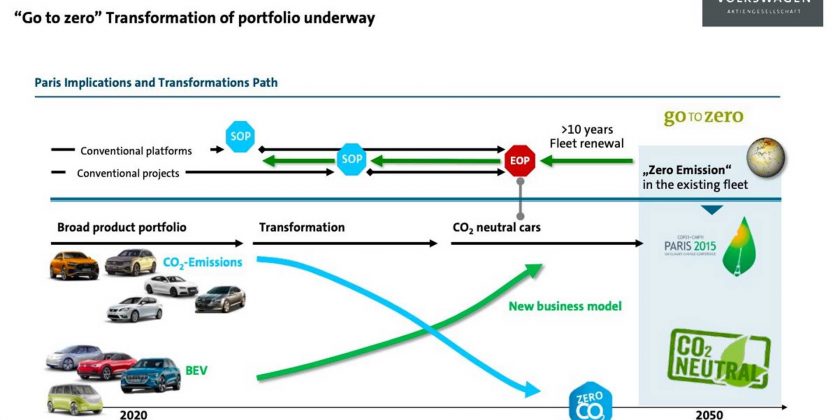 The company will have to pay a €275 million fine for missing CO2 targets this year.

On November 3, we told our readers that Volkswagen was preparing to pay “a couple hundred million euros” in fines for not meeting its CO2 targets for 2020. This December 10, the company not only confirmed it might pay up to €275 million: it may also phase out the production of ICE vehicles by 2040, as Matthias Schmidt shared on Twitter.

Have a good look at the slide above. It does not only imply that ICE production will end by 2040 with the descending arrow that represents combustion-engined cars. It literally says that the EOP (end of production) of these machines will happen ten years before the Paris Agreement’s deadline, in 2050. That would allow fleet renewal to take the remaining ICE vehicles still circulating out of city streets – or make them collector’s material.

One pressing reason for such a goal is the fine Volkswagen will have to pay for its 2020  emissions. The irony involved is that Volkswagen could have achieved its goals if diesel sales were stronger. In a way, Dieselgate is what pushed Volkswagen to try to sell its electric car before it was ready.

Although its sales numbers are pretty impressive, the ID.3 did not help the company avoid this punishment. What it may have achieved is lowering how much the company would have to pay: it could be around some billion euros without it.

After its software was fixed, the ID.3 will likely sell in much better numbers. Not only the hatchback: the ID.4 has already arrived in the Netherlands, for example.

Volkswagen is so confident about its ID family that it believes it will be fully compliant with CO2 restrictions from 2021 up to 2025. If that is a relief, €275 million is about a quarter of what a new model development demands. Regardless of not being so severe, it is a waste of money the German group is probably not willing to have anymore.